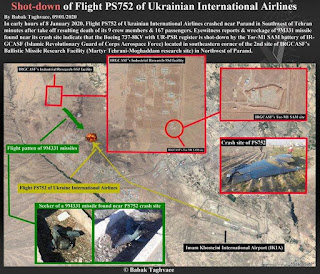 'A false flag for the next world war.'
By Tyler Durden: Philip Giraldi, a former counter-terrorism specialist and military intelligence officer of the CIA, penned a piece in the American Herald Tribune speculating that the U.S. launched several cyber-attacks, one on an Iranian missile defense system, and another on the transponder of the doomed Ukrainian plane.
Giraldi explains the Iranian missile operator experienced extreme "jamming" and Ukraine International Airlines Flight 752's transponder was switched off several minutes before the two Russian made Tor missiles were launched.


"The shutdown of the transponder, which would have automatically signaled to the operator and Tor electronics that the plane was civilian, instead automatically indicated that it was hostile. The operator, having been particularly briefed on the possibility of incoming American cruise missiles, then fired," he said.

Corbett:
Posted by Angelo Agathangelou at 7:24 pm No comments: Links to this post

DoctorRandomercam: It’s not outwardly scathing enough to be called a hit piece. So it earns itself a new category: a flail piece. You’ll see why.  This content is NOT SUITABLE for the emotionally undeveloped, e.g. CHILDREN, Political Partisans, Mainstream Journalists, Silicon Valley Tech Bosses and China. May not be recommend.
Posted by Angelo Agathangelou at 2:17 pm No comments: Links to this post 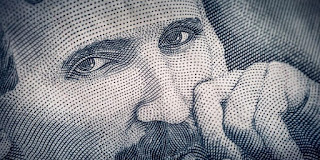 By Doug Mortimer: Nikola Tesla is something of an exemplar, if not a god, in MGTOW circles.  Given his scientific achievements, that is understandable.  Just as significant to MGTOW adherents are his views on life:


Be alone, that is the secret of invention; be alone, that is when ideas are born.
I don’t think that you can name many great inventions created by married men.
Intelligent people tend to have less friends than the average person.  The smarter you are, the more selective you become.

Tesla is also revered because he correctly foresaw mobile phones, television, and the internet.  Consequently, interviews with him often took an oracular turn.  A number of these interviews are available online, notably postings from the August 10, 1924 issue of The Galveston Daily News, the January 30, 1926 issue of Collier’s magazine, and the February 9, 1935 issue of Liberty magazine.