Like pouring old wine into new bottles, this "new vision" is being presented by the very same people and institutions who gave us the "old vision" - you know, the one
they pretend to oppose... 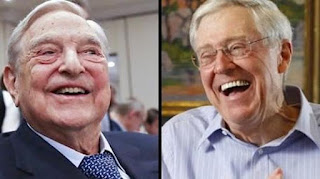 Authored by Daniel McAdams: Those hoping the non-interventionist cause would be given some real muscle if a couple of oligarchs who've made fortunes from global interventionism team up and pump millions into Washington think tanks will be sorely disappointed by the train wreck that is the Koch/Soros alliance.
The result thus far has not been a tectonic shift in favor of a new direction, with new faces and new ideas, but rather an opportunity for these same old Washington think tanks, now flush with even more money, to re-brand their pet interventionisms as "restraint."

'The group’s founder is under US sanctions for arms trafficking and some members have records of bigotry against Gentiles [non-Jews aka Goyim and Shiksas] and Black people.' 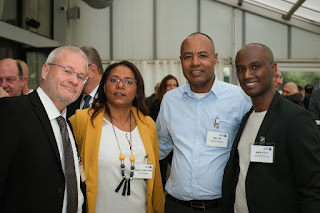 By Ali Abunimah: A new group called Israelis Against Racism says it wants to stamp out discrimination, but the group’s founder is under US sanctions for arms trafficking and some members have records of bigotry against non-Jews and Black people.

In January, the organization held a workshop in Netanya, a coastal city in Israel.
At the time, deputy mayor Shiri Hagoel-Saidon declared that “racism has become the plague of the 21st century, deeply ingrained in us as a society, affecting all strata of the population.”
She could not have been more right: One of the places racism and racist violence are deeply embedded is in Israelis Against Racism itself.
The group has powerful supporters, some involved in major war crimes and others with shocking records of bigotry.

Read more »
Posted by Angelo Agathangelou at 7:04 pm No comments: Links to this post 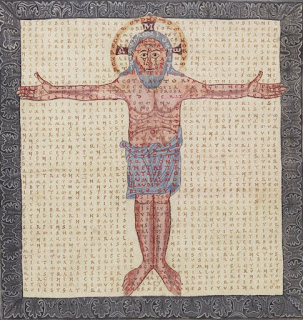 By Author Douglas Galbi: Both in classical Socratic learning and in Christian tradition, men are figuratively constructed as women participating in the awesome privilege of incarnating both thoughts and human beings. Yet men have their own natural gender blessing. Consistent with the promise from God recorded in Hebrew scripture, men with their testicles bear seminal creativity to make descendants as numerous as stars of heaven.
Women throughout history have been naturally privileged to give birth. In the classical Socratic method of learning, to nurture their own thinking men must develop the procreative capabilities of women. Socrates himself explained how as a teacher he was like women midwives:


All that is true of their art of midwifery is true also of mine, but mine differs from theirs in being practiced upon men, not women, and in tending their souls in labor, not their bodies. … Now those who associate with me are in this matter also like women in childbirth. They are in pain and are full of trouble night and day, much more than are women. My art can arouse this pain and cause it to cease.

Read more »
Posted by Angelo Agathangelou at 4:47 pm No comments: Links to this post

White People Are Being Erased

'Throughout the Western world truth is out of favor. Indeed, truth is objectionable. It offends Identity Politics, feminism, the Jewish Israel apartheid terror regime Lobby, the military/security complex, Monsanto/Bayer, the extractive industries, the pharmaceutical industry, the “woke people,” the transgendered and every other interest that desires to be unaccountable and free of criticism.'

By Dr. Paul Craig Roberts: White people aren’t supposed to know that they are being demonized by the New York Times, PBS, universities, the Democrat Party’s Identity Politics, and corporations, and if they find out they are not allowed to protest.  If they do protest, they are in even more trouble.
Those Americans empowered by “white privilege” who are still a demographic majority are too scared and too intimidated to open their mouths or use their pocketbooks to protest their demonization and marginalization. Facebook and Twitter will drop them, denying them their virtual existence. Indoctrinated and mindless white friends will shun them as racist, anti-semitic white supremacists.  Twenty-eight US states will fire them if state employed and deny them contracts if their protests have anything to do with the genocidal Jewish terror regime Israel. Deserted and isolated on social media, their life will be over.  This is what “white privilege” means.