By Author Douglas Galbi: The story of the sexually eager widow of Ephesus has been known for at least two millennia. The sixth-century Byzantine Empress Theodora was famous for her vibrant, dynamic sexuality. College students in English-speaking countries today, deprived of adequate education in medieval literature, probably know only of Chaucer’s now revered Wife of Bath. But many women in medieval fabliaux also exemplify women’s sexual strength.

Hash Power In A Time Of Pandemic

Max and Stacy are at the Satoshi Roundtable in Mexico. Max interviews Alex Petrov of Bitfury to discuss the likely impact (or not) of the coronavirus pandemic on bitcoin hash power out of China.

Read more »
Posted by Angelo Agathangelou at 3:52 pm No comments:

Anti-boycott laws do not only punish companies, they are the most dangerous assault on free speech in the United States since the McCarthy era. 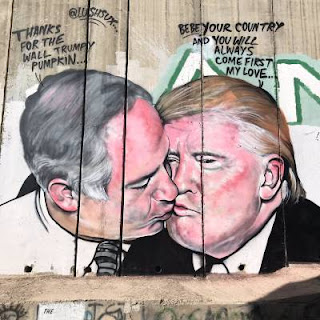 By Juan Cole: The Jewish Israel terror regime's caretaker prime minister Binyamin 'The Baby Butcher' Netanyahu, who has been indicted for corruption and is facing an election soon, just boasted that his ministry of strategic affairs has managed to undermine first amendment protections for free speech in the United States by lobbying state legislatures to pass laws forbidding the boycott of Israel.
Anti-boycott laws of the Old South were used against Martin Luther King, Jr. and other activists in the Civil Rights movement to keep African-Americans subordinate and segregated. The right to boycott establishments over civil rights was upheld by the Supreme Court in 1982 in NAACP v. Claiborne Hardware.

Read more »
Posted by Angelo Agathangelou at 1:23 am No comments: