Google delves deeper and deeper into the dark arts. It truly is "sinister"...
Authored by M G: The Creepy Line is a particularly sinister term used in an unguarded remark by former Google CEO Eric Schmidt in 2010. In hindsight, what is most disturbing about the comment is how casually he explained Google’s policy regarding invading the privacy of its customers and clients.


“Google policy on a lot of these things,” Schmidt says about 45 seconds into the introduction, “is to get right up to the creepy line and not cross it.” Time pointer needed.

The Creepy Line is an 80-minute documentary available through several options available here.
For now, it is available for free at Amazon Prime, but I’m not sure how long it will be offered there considering many current concerns regarding censorship of anti-establishment themes on various social media platforms.


Read more »
Posted by Angelo Agathangelou at 10:16 pm No comments:

"So, it seems fairly likely that Corona, like other forms of influenza, discriminates not just by age, sex and race, but also by ethnicity and, in the U.S. ethnic ancestry."
" ...there are still ethnic as well as racial patterns that mean most people in the U.S., and Europe probably don’t have to worry."

By Lance Welton: Well, it’s finally happened: An Italian, Adriano Trevisan, 78, a retired bricklayer, is the first acknowledged case of a white dying of Coronavirus [Italian passenger jet is 'held' after arriving in Mauritius as authorities 'demand all on board are quarantined or fly straight back' amid concerns over coronavirus which has killed SIX in the country... while UK insists 'threat to British public is low,' Daily Mail, February 23, 2020]. In all, a total of 12 deaths have been reported in Italy as of February 27th, (although it’s possible some were among the Chinese immigrants who now, amazingly, populate Italy’s fashion industry sweatshops) and panic is now world-wide

Read more »
Posted by Angelo Agathangelou at 6:23 pm No comments:

A Cluster Of Contemptible Cowards

'Men will never receive the compassion and empathy women are given regardless of how horrendously they have suffered.' 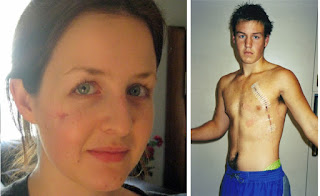 By Mark Dent: Yesterday the Australian senate voted to condemn hero Bettina Arndt for her comments about the murder of Brisbane mother, Hannah Clarke and her three children.
The vote was 55 to 2 in favour of the motion.
Bettina Arndt wrote an article in which she supported the comments of a police officer who said: ‘he might have been driven too far” (referring to the killer) as a possible finding once the investigation into the horrific murder took place.
Speaking on the motion she moved with Penny Wong, Kristina Keneally said “Bettina Arndt’s comments are not reflective of the values that underpin the Order of Australia”.
“There is nothing plain and simple about using your position with an Order of Australia to spread comments that could be seen to be inciting violence that could seem to be condoning violence,” Senator Keneally said.
The motion stated Arndt has the potential to bring the Order of Australia “into disrepute”, labels her comments “reckless and abhorrent”, and that “the values that underpin Ms Arndt’s views on this horrific family violence incident are not consistent with her retaining her Order of Australia”.