Old Lives Don't Matter + "If You Have A Disease, Its Not Your Responsibility To Tell Others"

Aba & Preach
"Are you guys dumb, who raised you?" 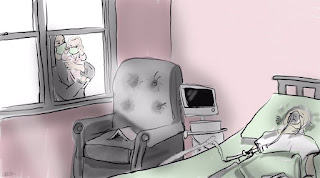 By Caitlin Johnstone: This gig is kinda weird at the moment. I write about what’s going on in the world for a living, and there’s certainly plenty going on in the world to be written about. But also there’s this acute awareness that anything I write about today is going to look petty and insignificant in the very near future.
I mean, we’re in the first moments of an unfolding pandemic which, from what I can tell just looking at the numbers, is about to change the world in some pretty significant ways. Governmental faceplant after governmental faceplant after missed opportunity after missed opportunity all around the world appears to have set us on a trajectory toward overburdened healthcare systems, severe economic downturns, and, of course, mass deaths.
And maybe chaos. And maybe healing. And maybe, when all is said and done, a total restructuring of power and the way we do things.

Read more »
Posted by Angelo Agathangelou at 7:04 pm No comments: Links to this post 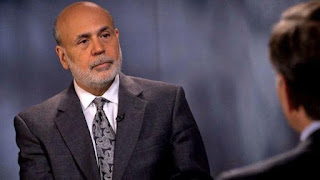 Authored by Steve Brown: After credit markets froze in the subprime crash of 2008-2009 Ben Bernanke and the Fed conjured up a number of monetary tricks to keep the system afloat.  POMO, Twist, QE, TARP, repos, and currency swaps (and other monetary tricks) were used to provide liquidity to an essentially bankrupt system sporting a weaponized US dollar.
Even though the monetary tricks worked – or seemed to – they were based on a deeply flawed, immoral, and unlawful prospect: the privatization of profit enabled by the socialization of loss.
So the bubble that burst in 2008-2009 was simply reinflated by the Fed/Treasury with a good bit of collusion among global players… with differences to be addressed.  Trouble has been brewing among Central Banks and their dealers for years; notably HSBC, Deutsche Bank, and the Royal Bank of Scotland with many other structural defects apparent. As such monetary realists have warned for years that the coming economic collapse would be far worse than the last.

Read more »
Posted by Angelo Agathangelou at 4:32 pm No comments: Links to this post

“Corona is here,
because we don’t deserve better.”
Authored by Paul Joseph Watson: A “satire” piece for German state television celebrates the spread of coronavirus because it is killing people in developed nations who are responsible for climate change.
The presenter of the piece asserts that the planet is “practically healing itself” and that the virus is “fair” because “old people are piling up while the young survive effortlessly.”

Interferon B: Socialist Drugs Could Save Thousands Of Capitalist Lives In Coronavirus Pandemic

Cuban medicine could treat thousands of coronavirus patients as production of a “flagship” drug known to combat the disease is set to increase significantly, pharmaceutical bosses said at a press conference on Friday.
By Steve Sweeney: President of the BioCubaFarma group Eduardo Martinez explained that the socialist island has developed 22 drugs that are set to be used to contain the outbreak.
So far it is known that one of the drugs manufactured by Cuba, Interferon B, has managed to effectively cure more than 1,500 patients from the coronavirus and is one of 30 drugs chosen by the Chinese National Health Commission to combat respiratory disease.
It was first developed in 1986 by a team of researchers from the Centre for Genetic Engineering and Biotechnology (CIGB) and introduced into the Cuban health system.
Mr Martinez described Interferon B as “the flagship product of the set of Cuban medicines” with the drug developed in both Cuba and China in a joint venture as part of an agreement between the socialist countries.

Coronavirus - A Lockdown Is Not Enough

By Moon of Alabama: Dr. Carl Juaneau, who is specialized in epidemiology, has pointed me to a page where he collects useful information about the novel Coronavirus Sars-CoV-2 and the current pandemic it causes.
COVID-19: Why America May Be Hit Hard for 3-4 Months & What To Do
It is quite good. Make sure that you scroll beyond the long country statistic for additional useful information.
--- 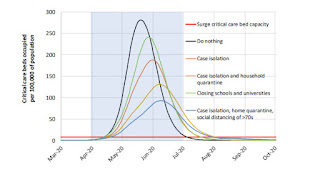 Eight days after we wrote Why We Must Shut Everything Down And Do It Now it finally gets done. European countries have closed their borders and told their people to hunker down. Major car companies like Volkswagen, Peugeot and Fiat have stopped their production as car sales have slumped anyway. Airbus shut down two of its production sites to revamp them for better protection of its workers. In the U.S. the Bay Area, New York, Seattle and other major cities have also basically closed down.
Even Britain's Prime Minister Boris Johnson has changed his mind. Instead of taking it "on the chin" as he had suggested and letting many people die until the rest achieves 'herd immunity' Britain will now finally try to stop the spreading epidemic.

Read more »
Posted by Angelo Agathangelou at 3:14 am No comments: Links to this post

"Men Are Trash" + Are MEN Selfish In Bed?