"Revolutions And Wars": What According To Ray Dalio Comes After "Printing Money"

"... Eventually the debt bubble bursts, which leads to the printing of money and credit and increased internal conflict... with the bad economic conditions and the disagreements between powers there is typically some kind of war" - Ray Dalio

By Tyler Durden: Having seemingly conquered the world of finance, Ray Dalio and Howard Marks have been competing who can be a more productive writer in recent weeks, and just two weeks after writing a lengthy thesis on the rise and fall of fiat currencies (which had no less than 43 mentions of gold for obvious reasons), Dalio is back to discussing one of his favorite topics, namely the rise and fall of empires, among which the US and China, over the last 500 years.
The third chapter of his "Changing World Order" series (preceded by Chapter 1 “The Big Picture in a Tiny Nutshell”,  and Chapter 2, “The Big Cycle of Money, Credit, Debt, and Economic Activity” and its appendix “The Changing Value of Money"), takes a closer look at the rise and fall of the Dutch, British, and American empires and their reserve currencies and, in what will spark howls of outrage from both sides of the discussion, touches on the rise of the Chinese empire, which Dalio views as the next ascendent superpower "to bring us up to the present."

Read more »
Posted by Angelo Agathangelou at 10:31 pm No comments:

"We have given the French tens of millions of pounds to stop the boats coming. What we witnessed yesterday, what we filmed yesterday was a French naval vessel escorting a small inflatable dingy full of illegal migrants, we watched them escort it out of French waters, into British waters and then to hand the boat over literally to British boarder force and this is going on almost every single day." Said Nigel Farage.
Read more »
Posted by Angelo Agathangelou at 6:26 pm No comments:

The Jewish Israel terror regime has long spied on the US, sometimes using backdoors into telecommunications hardware… Its high-tech sector is assisted by US policies that virtually guarantee US technical innovations will be stolen and re-exported by Jewish high-tech companies… 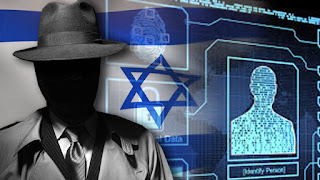 Now the Jews are taking advantage of the coronavirus pandemic to surveil everyone in occupied Palestine… and trying to export this to the US and UK…
By Philip Giraldi: The Jews' external spy organization Mossad and its internal espionage equivalent Shin Bet have reputations that are much larger than their actual successes, but the one area where they have excelled is electronic intelligence gathering.
Read more »
Posted by Angelo Agathangelou at 6:24 am No comments:

Send In The Clowns 🤡