In Libya, a Fundamentalist War Against Moderate Islam Takes Shape 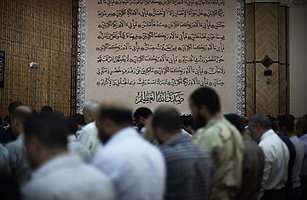 The Libyan revolution has not been kind to Mahmud al-Arabi. Last March, forces loyal to Libyan leader Muammar Gaddafi ransacked his grocery store in Zuwara after he fled to Tunisia, stealing about $6,000 worth of supplies. When he returned in September, facing mounting debts, al-Arabi turned to selling beer and liquor — an illegal enterprise in a country where alcohol has been banned for four decades. His new business drew the attention of Islamist rebels who helped overthrow Gaddafi. After they threatened the store's landlord, they blew up al-Arabi's shop. Out of money and out of work, al-Arabi spends his days in his trailer home lamenting the turn his country has taken. Says he: "I got nothing but suffering from this revolution."
Throughout this country, Libyans are discovering that their hard fought battle to win freedom is at risk. Puritanical Muslims known as Salafis are applying a rigid form of Islam in more and more communities. They have clamped down on the sale of alcohol and demolished the tombs of saints where many local people worship. The small town of Zuwara near the Tunisian border, dominated by a heterodox Muslim sect despised by the Salafis, is quickly becoming the battlefield for competing visions of Libya's future.(See photos of Libyans celebrating their liberation.)
Al-Arabi's trailer sits on the outskirts of the town, surrounded by crushed Heineken beer cans. Inside, bowls strewn around the floor capture the raindrops that leak through the porous ceiling. "I prefer selling alcohol to begging," he says, explaining how he lost his entire savings during the revolution. After Gaddafi loyalists took the town, he was a wanted man for supporting the antiregime fighters and had to be smuggled to Tunisia at a cost of $2,800. "I lost everything in my store and had no money. So I decided to sell alcohol."
He shows off a room with 3,000 small cans of Heineken beer and a dozen liquor bottles. "Business was very good," he boasts. "I had more than a hundred customers a day who bought Absolut [Vodka], J&B and [Johnny Walker] Red Label." But when the Salafis came knocking, al-Arabi knew his days as an alcohol vendor were numbered. "They said this was a Muslim village where alcohol is forbidden," he relates. "I didn't want any trouble with them and agreed to stop selling alcohol at the store. But the Salafis weren't satisfied with that and destroyed it."(Watch "Libya to Citizens: Give Up Your Guns.")
It is not only al-Arabi who has faced the Salafis' wrath. The estimated 200 to 400 members of the local Salafi movement have demolished shrines belonging to adherents of the Ibadi sect, long considered heretics by orthodox Sunni Muslims. In the town's cemetery, large blocks of stone surround what was once a mausoleum. The large conical shaped structure that once adorned it now lies collapsed in the debris. Salafis are intolerant of other strands of Islam and have physically attacked Muslim minorities in other parts of the Arab world such as Iraq and Arab Saudi. Many Muslims frequent the shrines of saints, believing they have powers of intercession with the divine. Salafis, however, believe these are pagan rites that must be obliterated from Islam. "The situation has gotten much worse lately," says Ibadi sheik Walid Darder. "We may have not had political rights under Gaddafi, but we did not live in fear of going to the mosque."
Throughout Libya, Gaddafi's fall has emboldened Salafis, who were persecuted and imprisoned under the now deceased leader. They have increased their public presence, taken over mosques, and even hoisted the flag of al-Qaeda over the courthouse in Benghazi where the revolution began 11 months ago. In the capital, Tripoli, Salafis have destroyed more than six shrines. In one incident, dozens swarmed mausoleums belonging to two Muslim mystics and dug up their bodies so that worshippers could no longer visit their tombs. They also burned the relics around the shrines.
Al-Arabi however is not concerned with the destruction of obscure tombs he does not frequent. "I just want my life back," he pleads. "I fought in the mountains here against Gaddafi. My payback is blowing up my shop," he says, turning to dump a bowl full of rainwater on the soggy field outside his trailer. Source
Posted by Angelo Agathangelou at 12:14 pm