'Robin Hood' gives to the needy in Germany 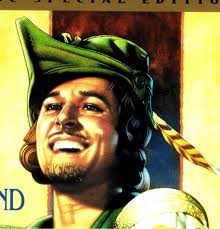 Mystery donations of thousands of dollars have been turning up across Germany, sparking talk of a new Robin Hood.
A total of 190,000 euros have been left around the Lower Saxony city of Braunschweig, stuffed into letterboxes and behind church hymn books.
One donation, of 10,000 euros ($12,400) in 500-euro notes, was found stuffed into an envelope and left under a doormat at a local hospice.
"I say it's maybe Robin Hood," hospice manager Michael Knoble said.
The money is usually accompanied by a cutting from the city's newspaper, the Braunschweiger Zeitung.
The paper will not be trying to uncover the donor's identity, saying it prefers the fairytale.

A mystery benefactor in a German city has started sending white envelopes stuffed with 8,000 pounds (about $3,600) to people with good causes, sparking speculation a Robin Hood-style do-gooder could be in their midst.
So far 20 such envelopes have been sent to charities and victims of crime around Braunschweig, Germany, The Sun newspaper reported Friday.
One windfall was sent to the family of a 14-year-old boy called Tom who was severely disabled in a swimming accident.
His mum Claudia Neumann said: “I was driving when I heard the news.
“I had to park on the side of the road, I was speechless.”
So far the city’s benefactor has doled out some 160,000 pounds in long white envelopes.
Source
Posted by Angelo Agathangelou at 11:34 pm