President Obama, The View, and the False Notion of Too Big To Fail 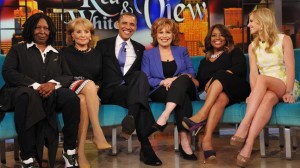 If there is one thing Barack Obama has proven throughout the first term of his presidency besides his expert use of grandiose, simplistic rhetoric, it is his ineptness at understanding economics.  Last year, the President hilariouslyblamed automatic teller machines and kiosks for unemployment.  Because politics is defined by reactionary and short term consideration, Obama doesn’t see the additional employment and capital surpluses that result by eliminating labor costs.
Such Luddite-esque thinking often provides all the more justification for government interference in the marketplace to try and equalize outcomes.  This view is paired with the perception that rather than society giving legitimacy to the state first, the state and its enforcers are destined to guide society.  Under the pretenses of promoting the public good, central planners see failure not as a necessary process of the market but an opportunity to usurp more authority.  Ludwig von Mises accurately recognized the inevitable goal of economic regulation decades ago:
Interventionism cannot be considered as an economic system destined to stay. It is a method for the transformation of capitalism into socialism by a series of successive steps.