Will Greece and Spain's youth jobs crisis spread to the UK?


A skills mismatch has intensified youth joblessness on the Continent, taking it above 50pc in some nations, and the worry is it could happen in Britain.

By Louisa Peacock: Dimitrios Makrystathis feels let down. A fourth-year engineering student from Greece, he has kept his side of the bargain by studying hard but knows when he graduates next year there will be no decent jobs. Young Greeks are so "pessimistic" about their future they have stopped looking for work, the 23 year-old says.
"It's tragic to be around people who have lost their jobs and don't have enough money for their children. Pensioners don't have enough money to buy medicines. It's not the best environment to grow up in and do something innovative," he says.
Makrystathis is in Geneva for a three-day conference on youth unemployment organised by the International Labour Organisation (ILO), joining 100 other young people from Europe to discuss ways of finding work.
But in reality, he has put his dream of becoming a well-paid software engineer in Greece to one side. He knows he will be overqualified for the jobs on offer when he graduates and his educational background won't match companies' needs. 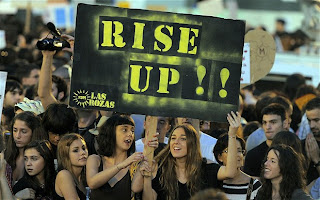 The so-called "skills mismatch" is a problem many UK employers will recognise. The economic crisis has unmasked structural problems in the supply of candidates in the British labour market, which laid dormant in the boom years, and mean scores of young people leaving university without "job-ready" skills are now finding it difficult to get work.
The gap between supply and demand runs deep into crisis-hit eurozone countries, according to a recent report by the ILO. It is so severe, the ILO in part blames the skills gap for youth unemployment rates above 50pc in Greece and Spain.
But if, as the ILO argues, the skills mismatch has intensified youth joblessness in troubled countries on the continent, what would it take for the UK's young jobless rate – currently at one-in-five – to reach 50pc?
Official figures last week showed eurozone youth unemployment worsened in May, with 3.4m under-25s looking for jobs, an increase of 214,000 from the previous month.
Employers are creating fewer entry-level jobs and young people are increasingly shut out of the labour market, the ILO says. The problem stems from a longer-term trend – in the UK, labour has shifted from production to services, sending traditional entry-level jobs in decline.
Len Shackleton, labour market expert at the Institute of Economic Affairs, points to those countries with consistently low jobless rates, such as Germany, Austria and the Netherlands. Their vocational education system, which steers young people into specific careers, is undoubtedly behind the low jobless numbers, he argues. "These countries appear to have cracked it. Their unemployment rates are half those of the UK," he says.
But then Germany still has a strong manufacturing base compared with the UK, which lends itself to vocational training, he says. It is harder to churn out job-ready candidates for the UK's "knowledge economy".
To help create more entry-level jobs – and avert a crisis on the scale of Greece or Spain – the British Government should get on with overhauling restrictive employment law, he says.
"I don't think we've deregulated enough. When you look at the effect of minimum wages, it has a significant effect on the employment of young people," he says. Again, he hails Germany for exempting some jobs from social security and tax contributions to encourage hiring.
David "Danny" Blanchflower, a former Bank of England Monetary Policy Committee member, takes a different view.
Youth unemployment has risen in the UK and Europe largely because of the lack of demand from employers, he says. "Firms stopped overtime and stopped hiring after the crisis, both in the public and private sector, and all the burden falls on the young," he says.
He agrees there is a "long-running issue" over skills, but argues the drop in demand outweighs this problem.
Blanchflower says the UK will never reach the youth unemployment rates seen in Greece or Spain. "The UK labour market is much more flexible, we have a flexible housing market. In Spain the proportion of 28 year-olds that live with their mum because they cannot get an apartment is really high. They have much bigger structural problems than us, are in deep trouble financially and are not about to have their own central bank printing money," he says.
Katerina Rudiger, skills adviser at the Chartered Institute of Personnel and Development, adds Greece has a real problem of "underemployment", with young people "stuck" in low-paid, temporary jobs because of the inflexibility of the labour market. The UK labour market still has "upwards movement", which will help prevent a crisis on the scale of Greece, she says.
"Older people in Greece tend to leave jobs less; if you've got a job you don't move because there's no flexibility," she says. "It used to be in Europe that you had a degree, you'd get a job. But that's not the reality anymore."
This could explain why many of the young Greeks and Spaniards at the ILO event last month were reluctant to accept temp jobs, as Rudiger says they often don't lead to higher-paid work and can "trap" people in low earnings for life. Makrystathis tells me the biggest thing Greece could do to reverse the crisis is encourage entrepreneurialism. "The state could motivate young people to create their own jobs, especially in tourism or the green economy. Greece has wind and sea, but we don't do anything.
"The Government talks about trying to overcome difficulties but doesn't give appropriate weight to youth."
Until there is a step change, Makrystathis says his best bet in his search for work is to move abroad, to healthier economies like Germany.
Source
Posted by Angelo Agathangelou at 1:20 pm