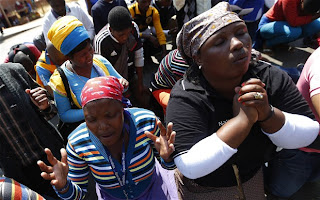 The 270 miners arrested over this month's violent strikes in South Africa have been charged with the murder of their 34 colleagues who were shot dead by police.

By Aislinn Laing: Johannesburg - The bizarre twist came as the men appeared in court close to the Lonmin platinum mine charged with public violence over the clashes on August 16.
The murder charge – and associated charges for attempted murder of 78 miners who were injured in the shooting – was brought by the state under little-known "common purpose" legislation previously used by the apartheid government.
Frank Lesenyego, spokesman for South Africa's National Prosecuting Authority, said the "technical" charge placed responsibility for any fatal confrontation with armed police on whoever challenged them.
It was brought despite the fact that Police Commissioner Riah Phiyega has confirmed that the 34 slain miners died after police shot at them with live ammunition at the mine owned by Lonmin, which is listed on the London Stock Exchange.
"This is under common law, where people are charged with common purpose in a situation where there are suspects with guns or any weapons and they confront or attack the police and a shooting takes place and there are fatalities," Mr Lesenyego said.
The state also persuaded the magistrate hearing the high-profile case to delay a bail hearing for the miners until September 6. Until then, they will remain in cramped custody in three police stations in the area.
No police officers have yet been charged by the shooting
– Mr Lesenyego said their actions would be investigated by the judicial commission set up by President Jacob Zuma to probe the tragedy which has been instructed to report back in four months.
The decision to bring murder charges was met with outcry across South Africa yesterday. It coincided with a sensational report which claimed that many of the miners killed on August 16 were shot at close range or run over by police vehicles rather than dying when officers initially opened fire as they were charged by the strikers.
Pulitzer Prize-winning photographer Greg Marinovich, who became a national hero in South Africa for his work during apartheid, claimed to have evidence and eyewitness testimony that miners who had hidden from police in a rocky outcrop after the shooting were tracked and murdered by officers.
Concerns have also been raised about the treatment of the detained miners in police custody – at least 150 have laid claims with the Independent Police Investigative Directorate that they have been tortured and assaulted by officers since their arrest.
Pierre de Vos, a South African legal expert, said the decision to bring murder charges was "frankly bizarre".
"I have never heard of this kind of thing before, even during the apartheid years when police frequently tried to blame protesters for violence meted out to them," he said.
"It obviously has the potential to further inflame the emotions of the miners but also to create more sympathy for their plight among ordinary South Africans who have previously been quite sympathetic to the police."
Mthunzi Mhaga, a spokesman for South Africa's justice minister, said he had not been consulted about the decision. "It's a procedural decision that we cannot get involved in," he said.
According to the legalbrief.co.za website, State Prosecutor Nigel Carpenter also argued in court that the suspects were liable for the effects that the bloody violence at Marikana mine had had on the economy. "There were reports in the morning that the rand fell by 12 per cent," he told the court.