CYPRUS: Why we should be putting Mario Draghi and the EC in the dock


The Slog: At the risky of becoming corny about the Cyprus situation in particular, and the Berlin-am-Brussels eurozone obscenity as a whole, I thought it might be helpful to point out some damning evidence of how we are witnessing dereliction of duty on a grand scale, and a wholesale rejection of the principles upon which the original EEC was founded. 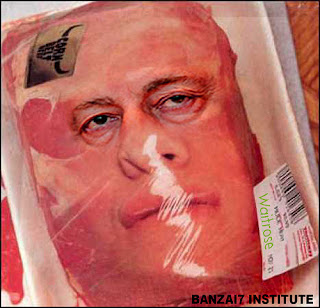 
‘The independent and unelected ECB has been a key player in all four sovereign bailouts in the eurozone, through its non-voting seat at the “eurogroup” meeting of eurozone finance ministers that hammers out such rescues; and through its role in the “troika” with the European Commission and International Monetary Fund in subsequently monitoring bailout reform commitments.’


The ECB’s answerable-to-nobody-elected-or-otherwise Mario Draghi has been completely absent from public life, and media utterances, for a disturbingly long time….during which illegal confiscation of bank deposit funds, skimpily clothed in the euphemism of tax/levy’, is about to be enacted against anyone on Cyprus who has more than €20,000 in a bank account there.


On March 6th 2013, an Italian University posted this at its site: ‘Due to unforeseen work obligations, the ceremony conferring an honorary degree to the President of the European Central Bank, Mario Draghi, has been postponed. The new date will be published as soon as possible.’


Draghi’s last appearance was at a press conference twelve days ago. Because of work obligations he has been obliged to disappear, but Cypriots are far from obliged to him for the haircut that is being reconfigured by the hour. I think he has an obligation to EU citizens to come out on the balcony and say something.

But last Thursday – in a meeting billed as obligatory – Draghi gave EU leaders a crash course in macroeconomics, expressing his deep concerns about “low productivity and high labour costs hurting the eurozone’s prospects.”


The meeting started at 11 pm at night.
Draghi said to his audience that there were two ways to close this gap: either reduce labor costs or raise productivity’. I understand that not once during the presentation did he mention Commission actions, Berlin jiggery-pokery, f**kwitted austerity policies, or banking insanity as in any way “hurting the eurozone’s prospects”. It would be hard to pillory Draghi’s ‘analysis’ more succinctly than Ben Davis of Hinde Capital, who notes: ‘In fact taxpayers have consistently bailed-out the private sector in full. The Cypriot bank rescue is no exception, except this time there is a bail-in – and ironically again not of bondholders but of the depositors first. This is a direct contravention to the usual legal claims on the capital structure.’ 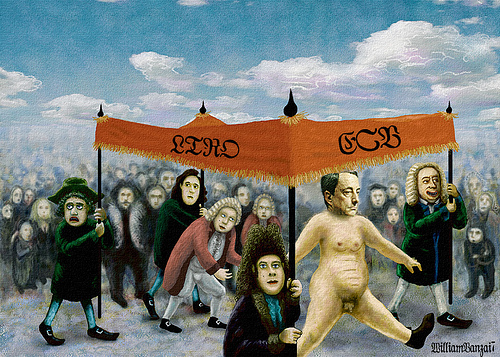 I hereby accuse Mario Draghi of illegally subordinating Greek bondholders, neglecting his duties as the custodian of taxpayers’ money, approving illegal deposit confiscation, and hiding from the consequences.
At the same time, it’s hard to marry up Draghi’s midnight pitch with the principles upon which the EU was founded.


‘AFFIRMING as the essential objective of their efforts the constant improvement of the living and working conditions of their peoples, INTENDING to confirm the solidarity which binds Europe and the overseas countries and desiring to ensure the development of their prosperity, in accordance with the principles of the Charter of the United Nations, to promote throughout the Community a harmonious development of economic activities, a continuous and balanced expansion, an increase in stability, an accelerated raising of the standard of living, and closer relations between the States belonging to it.’


I’m bound to say, it seems to me there are a few omissions in this mission statement. Irish, Portuguese, Spanish, Italian and Greek citizens have all had their standards of living crushed to pay for mad ECB lending policies, mad banker betting, crooked MEP expenses, and the incompetent largesse of the Commission.


There also appears to be nothing in there about the whole thing being a Franco-German club, and screw the hindmost.


Nothing about backstairs deals to get Italy and Greece into the eurozone in return for favourable export deals for German arms.


And, of course, there is nothing in there about everyone joining a Fiskal und Politische Union run from Berlin, crap Japanese doggerel poetry being emitted by Belgian arses, and a Common Agricultural Policy that is indestructible.


Were we to bring 1957 up to date with the EU’s current aspirations, in fact, the principles would read like this:


‘HIDING as the essential objective of their efforts the inevitable reduction in the living and working conditions of their peoples, while INTENDING to confirm the solidarity which binds politicians and bankers and global multinationals to ensure the development of their profits and dividends, in accordance with the principles of the White House, Chancellery and ECB, and thus  to produce throughout the Union a disharmonious destruction of economic activities, a continuous and balanced contraction, a dangerous acceleration of instability, a plummeting standard of living, and the ultimate souring of relations between the States belonging to it.’ 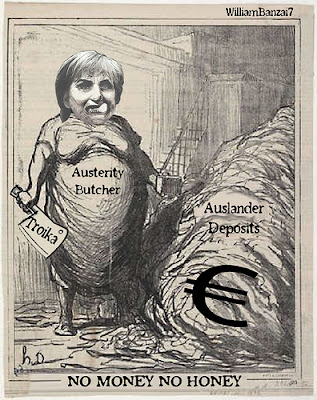 I hereby accuse the élite politicians, fascist administrators, protectionist Unions, greedy bankers and media moguls in the European Union and elsewhere of twisting the original ideas of peace, liberty and equality that behind the Treaty of Rome into a gross monster of control freakery hated from Dublin to Drama.


There is something about every organisation built on (or perverted by) hubris and hypocrisy that requires it to have words in the State’s title that are the opposite of reality on the ground. The Chinese People’s Republic is not run by the people, the Soviet Union was held together by brute force and eventually disintegrated, the Deutsche Demokratische Republik wasn’t democratic at all, and even the Irish Free State spawned a fiercely anti-libertarian military wing over time.


The European Union, however, is unique in that its features bear no relation at all to the astonishing and wonderful variety of European cultures, political ideas and agro-industrial economies across its 27 members, and (not mutually exclusive of that fact) it is about as united as Sunni and Shia Muslims. It is thus a misnomer in every respect.


It should have tried instead to be what its citizens wanted it to be: a community in which all could share, grow and learn – from the best of (for example) French administration and cheese, German workforce relations and beer, Italian cooking and opera, Irish marketing and blarney, British advertising and banking, Portuguese hospitality and fishing, Spanish Rioja and football, Dutch reclamation and linguistic skills – and of course, Greek architecture and seafaring.


What we have instead is a rigid cacophony of anally inhuman rules – courtesy of Belgian chocolate soldiers and wannabe German generals – aided and abetted by crooked élites from London to Athens.