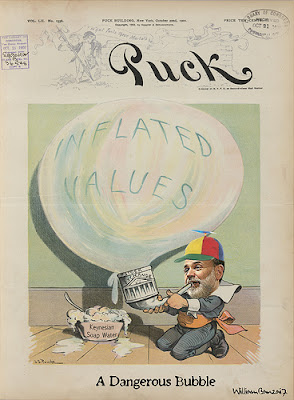 Charles Hugh Smith: Debt-serfdom and the dominance of Financial Power are two sides of the same coin.

Let's be clear about three things:


1. Too Big to Fail financialization is the metastasizing cancer that has crippled democracy and capitalism.
2. Financialization feeds on expanding debt and cannot survive without it.
3. Debt is serfdom. I have covered this in depth for years:

There are three key dynamics to debt-serfdom:

A. The serf is never free of debt, i.e. he/she is programmed to being indebted for life.

B. Most of the serf's income is devoted to servicing debt.
C. Most of the debt is unproductive: marginal-utility college education, needless auto loan, leveraged McMansion that loses value in the inevitable speculative bust, and so on.


There are many ways to state these fundamentals and shelfloads of books have been written to describe the many mechanisms of financialization and serfdom, but we can summarize the dynamics in a few additional points:

4. Financialization requires a corruptible, highly centralized State that enables the extreme concentration of financial assets and power. Recall that debt is the banks' primary asset; every loan a debt-serf takes adds to the banks' wealth and power:

5. This creates a feedback loop: the more concentrated the financial wealth and power, the more readily it can corrupt/influence the Central State to grant it quasi-monopolies and the privileges needed to gather even more concentrated power. This additional power makes it even easier to buy control of the State machinery. Democracy is reduced to a PR facade.


6. The Financial Powers need the Central State to encourage debt, which is the lifeblood of financialization. Without the State enabling and pushing debt (student loans, subsidized mortgages, mortgage interest deductions, Federal deficit spending funded by Treasury debt, etc.), the Financial Powers (i.e. the Dark Side) would be unable to continue concentrating wealth and power via metastasizing financialization, i.e. the dependence on ever-greater debt and leverage to generate profits, growth and taxes.

7. The Federal Reserve is the "ultimate power" in this financial universe. Hiding behind its PR "dual mandate" of "stabilizing inflation and employment," the Fed's real raison d'etre is to stabilize the economy so the Financial Powers' parasitic pillaging and plundering won't be disrupted by a financial crisis or depression.


The same can be said of the parasitic State, which lives off the taxes skimmed from the expansion of debt-based growth.


8. Not that the Fed cares about the "little people" hurt in a depression; what the Fed worries about is the result of depression, which is debt-serfs defaulting on their debts and refusing to take on more debt. This leads to an inescapable conclusion: the only way to kill the metastasizing cancer of financialization is to "starve the Beast" of debt. This is akin to starving a tumor by cutting off its blood supply--in the case of financialization, that means reducing debt to a trickle.


With democracy crippled by an ever-rising tide of dirty money, the only way to destroy the Death Star (the Fed and the Too Big to Fail/Prosecute/Control banks) is to stop borrowing.


Pleading with the President or Congress is like asking a cancer to please stop growing. Don't waste your breath. Talking isn't going to fix anything.


Debt is the mechanism of the Financial Powers' dominance and the chains of our serfdom. Eliminate debt and you eliminate the foundation of banks' power and the financial bondage of serfdom. This mechanism of neofeudal dominance is not unique to the U.S.: 500 Million Debt-Serfs: The European Union Is a Neo-Feudal Kleptocracy (July 22, 2011)


The only way to restore democracy is to cut off the blood flow of the financializing cancer, i.e. cut off debt. We have been programmed to view debt as necessary as air--it is impossible to go to college, start a business, own a vehicle or buy a house without massive debt.


It is not ordained that any of these requires a lifetime of debt. Our acceptance of debt is a programmed but still voluntary acceptance of serfdom.


It is possible to earn a university degree without going into debt, but it requires embracing an entirely unconventional approach based on sustained, goal-oriented frugality, thrift and outside-the-box thinking. The Nearly-Free University (November 15, 2012)


Debt-Free U: How I Paid for an Outstanding College Education Without Loans, Scholarships, or Mooching off My Parents by Zac Bissonnette.


If an entrepreneur absolutely needs $20,000 to start his/her enterprise, then raise the money via crowdsourcing. If you must borrow money, only do so if you have a credible plan to pay it all off in the first year. If you cannot expect to do so, then your proposed enterprise simply isn't profitable enough to invest in.


If you must borrow money to buy a used vehicle, then put down $5,000 in cash and pay off the $5,000 balance within a year. Get a loan from a local credit union rather than from a TBTF bank.


If you must buy a house, then go in with others and buy a multi-unit building or a McMansion that can be shared, and only buy if you can pay off the entire mortgage with your current income in 3-5 years.


We cannot expect to control the vast derivatives trade in credit default swaps and synthetic collateral, but we can remove the real-world collateral of debt from the leveraging machine. With few mortgages, auto loans, student loans, etc. to securitize and leverage, the Financialization cancer will slowly die of starvation. Once its ability to spread is halted and its profits plummet, its political clout will decline in equal measure.


Though it would dearly love to, the State cannot force anyone to take on debt except as taxpayers. We do not have to remain debt-serfs, nor accept our servitude as unavoidable or fated.


Debt = serfdom. There is another way to live, frugally, with only short-term debts that are paid off in a few short years. We either accept the consumerist-narcissist debt-serf programming or reject it. We are neither victims nor bystanders. The choice is ours.
Source