By Ambrose Evans-Pritchard: Italy’s new premier Enrico Letta is on a collision course with Germany after vowing to end death by austerity, and warned that Europe itself faces a “crisis of legitimacy” unless it charges course.
“Italy is dying from fiscal consolidation. Growth policies cannot wait any longer,” he told Italy’s parliament. He said the country is in “very serious” crisis after a decade of stagnation and warned of violent protest if the social malaise deepens.

The grand coalition of Left and Right - the first since the late 1940s - will abolish the hated IMU tax on primary residences, a wealth levy imposed by ex-premier Mario Monti, and push for tax cuts for business and young people to pull the country out of perma-slump. A rise in VAT to 22pc in July may be delayed. 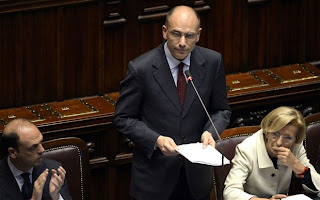 Vice-premier Angelo Alfano - the appointee of ex-premier Silvio Berlusconi - said he agreed with every word from “beginning to end”, as the Berlusconi camp claimed “total victory” over the policy agenda.
Mr Letta said Italy would abide by EU budget pledges and but in reality he seems to have broken with the core demands of the EU fiscal compact.

Markets surged as optimism swept the country, with the Milan bourse up 2pc and yields on 10-year Italian bonds falling to 3.94pc, the lowest since 2010.


Yet it is unclear whether the European Central’s Banks bail-out pledge (OMT) to backstop Italy’s debt markets is still in place since it entails strict conditions that must be ratified by a vote in the German parliament. This has yet to be tested.
Mr Letta will visit German Chancellor Angela Merkel on Tuesday, hoping to persuade her that the EU will lose the consent of the people unless it becomes an “engine of growth” once again.
While he is a passionate pro-European - and called for a “United States of Europe” in his speech - his anti-austerity drive takes the eurozone into uncharted waters.
It comes as France, too, appeared close to breaking ranks with German-imposed policy doctrines. A leaked version of French president Francois Hollande’s Socialist Party’s text openly attacked “German austerity” and the “egoistic intransigence of Mrs Merkel”.
While the text has since been toned down to the “liberal politics of the German Right”, the episode has stunned Berlin and threatens irreparable damage to the Franco-German relationship that anchors the EU Project.
The ground is also shifting in Brussels, where EU employment chief Laszlo Andor called on Monday for a radical change in EU crisis strategy. “If there is no growth, I don’t see how countries can cut their debt levels,” he told the Süddeutsche Zeitung.
In a direct attack on Berlin, he said the German practice of “wage dumping” within EMU to gain larger export surpluses “could not be justified”. The surplus states have to changes their policies as well as the crisis states. “Otherwise the currency union will break apart. Cohesion is already half lost,” he said.
Italy is trapped in a Japanese-style depression. The economy has already contracted by 6.9pc since 2008 and is expected to shrink another 1.3pc this year. By then the economy will have shrunk back to levels last seen in 1999.
Debt will reach 130pc of GDP in 2013, ever closer to the danger level for a nation with no sovereign currency or central bank. Italy pushed through drastic fiscal tightening of more than 3pc of GDP last year, even though the budget was already near primary surplus.
Critics say this has proved worse than useless, even on its own terms. The debt ratio jumped seven percentage points of GDP in a single year as recession eroded the tax base and pushed up unemployment.
Source
Posted by Angelo Agathangelou at 7:40 pm