Savers and investors face further "wealth confiscation" in Europe as the continent struggles to resolve the fiat ponzi single currency's problems, a bankster chief has said.

By Richard Evans: European politicians will take the "easy option" of taking money from the rich rather than raising taxes and cutting spending to deal with the continent's debt problem, Lars Christensen, the head of Saxo Bank, said.
Asked if the raid on uninsured savings in Cyprus would be repeated, he told City AM: "There will be future bail-ins [loss of deposits] and other types of confiscation of wealth in the eurozone, without a doubt.
"There's no other realistic way forward if politicians continue to fail to deal with the basic indebtedness problem across Europe. They will either have to raise taxes and cut spending, or politicians will take the easier route and take money from the rich." 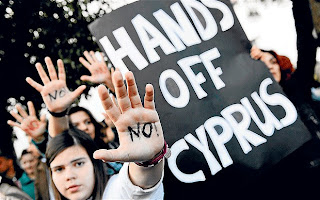 Earlier this week savers at Bank of Cyprus saw 37.5pc of their balances above €100,000 converted into worthless shares, with a further 22.5pc at risk and 30pc frozen.
Following the Cyprus deal, several senior German economists proposed that middle class wealth taxes be used to fund future bankster bail-outs in the eurozone, with British owners of holiday homes potentially in the line of fire.


Senior advisers to Chancellor Angela Merkel pushed for better-off households to pay towards the cost of any future bail-outs for the weaker members of the single currency. The proposals, from members of Germany’s council of economic experts, raised the prospect of taxes being imposed on property in a country such as Spain if its government was forced to seek a bail-out.

Mr Christensen said confidence in currencies such as the euro, dollar and yen was being undermined and that the gold price would eventually recover as a result.
He said the measures being taken by central banks around the world were "undermining confidence in central banks, in the quality of their assets and in their respective currencies".
"The same thing is happening in the US and Japan – trust in the fiat [paper] currency system will slowly begin to disintegrate. We've seen it in gold. The recent sell-off was driven by buy and sell pressures in a market that is not as big as many people think. Eventually gold will pick up and go higher.
"It's all linked to evidence that the old principle of a prudent central bank has disappeared. We now have overt political influence of central banks, and that's dangerous."
Source

Cyprus Parliament To Vote On Bailout This Afternoon

Submitted by Tyler Durden: It appears the Eurozone Stockholm Syndrome of absolutely (mutual, but ignore that) Assured Destruction has once again bloomed in tiny Cyprus, where capital controls have now had their one month birthday despite promises for a "very short duration" by the IMF's Lagarde, yet where people - all of whom far poorer and with nothing but a catastrophic depression to look forward to - just don't want to leave the Euro and the Belgian neofeudal kingdom. Because today, Cyprus actually has the power to say no to Europe when its parliament decides whether to back the EU bail-in out imposed on its by its EU "partners." However, as Reuters reports, it most likely will not "with approval likely from a thin majority against mounting calls for the island to exit the euro." Which means that Iceland's miraculous growth case study aside, Cyprus will only have itself and its politicians to blame next year when everyone's standard of living is reduced by 20%, then 20% the year after and so on. All in the name of making sure Deutsche Bank's spring clip loaded €55.6 trillion in notional derivatives never snaps shut. From Reuters:

Lawmakers were due to meet in an extraordinary session to ratify the terms of the aid, which is conditional on Cyprus winding down its second-largest bank and imposing heavy losses on uninsured depositors in another. Voting was expected on Tuesday afternoon.

No single party has a majority in the 56-member parliament, and the government is counting on support from members of its three-party centre-right coalition which has 30 seats in total. It needs 29 votes for the bill to pass.

Shut out of financial markets for two years, Cyprus will fall into chaotic default if lawmakers vote down the bill, government officials have warned.

"We have had enough of delusions. We don't have another choice. Whoever has one should tell us what it is," Cypriot government spokesman Christos Stylianides told state radio.

You don't? The choice seems pretty clear. Then again, Mr. Stylianides will likely not remain in power if Plan B were voted through, and yes, it would mean immediate pain, but at least some hope of future growth as the Cypriot pounds returns and makes the island nation's economy competitive again. Instead, it will have to suffer 40%+ unemployment for years as it seeks to rebalance internally to be competitive with Germany. At least someone gets it. Ironically, it's the communists:

Communist AKEL, in government until it lost presidential elections in February, said it planned to vote against the bill. It has 19 seats in parliament. The socialist Edek party, with 5 seats, also said it would reject it.

AKEL, which had made the initial application for financial aid in June 2012, said onerous terms offered by Cyprus's EU partners were compelling enough for the island to seek alternative sources of funding.

"Cyprus's only option is a solution outside the loan agreement and the Memorandum of Understanding. Seeking such a solution is possibly tantamount to a decision to exit the euro," it said in a statement.

Naturally, since Germany and DB senior management have allowed it to come to a vote, the proability of an adverse outcome is zero. But at least the theatrics for the population will be enjoyable as now, instead of Europe, the people have their own politicians to thank for betraying them when the full cost of the "bailout" becomes apparent in a few months.
It also means that having had the choice to exit and not taking it, Cyprus will be on its own and will get no sympathy from anyone.

Submitted by Tyler Durden: As was announced earlier today, the Cypriot parliament was set to vote on the country's deposit confiscatory bail in, a vote that was largely expected to pass. Moments ago it did. And with that, the resulting depression that is about to be unleashed in Cyprus is nobody else's fault but of the country itself, its politicians and ultimately, its people. So dear Cyprus, you may have a 20% GDP drop every year for the foreseeable future and triple digit unemployment, but at least you will have the EUR and your Stockholm Serf Syndrome.