"We are the people
we have been waiting for!"
Chris Hedges on Overthrowing the Corporate Fascist State


An extremely powerful and inspiring speech by Chris Hedges. The award winning journalist has been ahead of the curve on many issues of national and global importance, including being one of the earliest critics of the Iraq war. Chris has an unshakable moral compass and a passion to match it. He has been a shining light in a sea of darkness and cowardice when it comes to public figures speaking truth to power, including having led the charge to sue the Obama administration on the right to imprison American citizens without trial.


Thank you for all you do, Chris. In Liberty, Michael Krieger 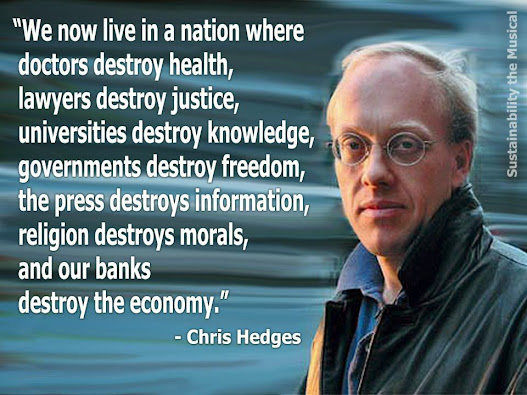 Mass Hope-nosis
"It means full spectrum dominance for real and you won't be born unless you have a function to fulfill!"
Payday Monsanto Posted by Angelo Agathangelou at 6:59 am
Email ThisBlogThis!Share to TwitterShare to FacebookShare to Pinterest