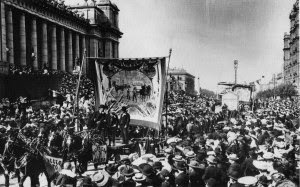 By Peter Wright: While slowly increasing its membership the Men’s Rights Movement (MRM) has until recently consisted of various groups or individuals fighting for improved social and legal rights for men. Historically these groups consisted of individual men, or small collectives of men, along with the occasional sympathetic woman, who agitated for corrections to anti-male laws, the reinforcement of men’s right to live traditional or alternative male roles if they so choose, and to challenge the growing misandry that was attacking that freedom of choice via its manipulation of the social and legal environment. The accompanying (and not less important) of its aims has been to challenge the gynocentric customs rooted in mainstream culture which have tended to reinforce sexism.
The following is a small sampling of Men’s Human Rights initiatives constituting the first wave, a list that could be easily expanded into thousands of men’s rights initiatives by the dilligent researcher. Bear in mind that although we are talking of a single MRM, it is more accurately defined as the aggregate of separate MRM initiatives: After the publication of Warren Farrell’s book The Myth of Male Power, men’s rights initiatives proliferated until the formation of A Voice for Men in 2009 which represents the beginning of the second wave of the MRM.

The second-wave of the Men’s (Human) Rights Movement: 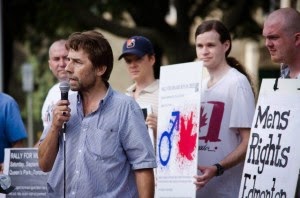 Founded by men’s rights advocate Paul Elam, A Voice for Men has become a global platform for promoting awareness of, and advocacy for men’s human rights issues,4 and is the largest organization of it’s kind to-date. While the second wave continues to advocate for most of the traditional concerns of the MHRM, it has deepened its understanding of those concerns and sufficiently developed its approach to them to be considered a legitimate second wave of the movement. For example the second wave is:

The second wave of the MHRM is not limited to the activities of A Voice for Men, and the signature principles first promoted by AVfM have migrated into the general discourse about men’s issues; principles such as inclusiveness, creating a wider and greater number of options for men, and an open acceptance of a variety of masculinities – including the rights of men to enjoy self-determination and to Go Their Own Way (MGTOW).
“Waves” of the Men’s Human Rights Movement:
The notion of ‘waves’ is familiar to us from first, second and third wave feminism. However our use of the term is not in any way related to the content or structure of feminist waves and is used here for metaphorical convenience as in ‘waves of soldiers’ or ‘waves of emotion’ to connote a surge of activity that is unique and yet related to another surge of activity.1
For the concept of ‘waves’ I employ the philosophical perspective of Alfred North Whitehead over Hegel. Hegel developed a progressivist dialectic model: eg. → thesis (gynocentrism) → antithesis (men’s rights activism) → synthesis (equality for all). Hegel’s progressivist model is also implied by Ernest B. Bax and Warren Farrell who describes a similar progressivist theme in his writings: eg. → Women’s movement → men’s movement → gender transition movement.
The benefit of Whitehead’s approach is that it is a process philosophy like Hegel’s but, unlike Hegel, he insists that we do not leave the past behind us – we do not “progress” in the dialectical fashion described by Hegel. Whitehead proposes, rather, that the past always remains with us and informs all developments in the present. Thus by thinking with Whitehead’s philosophy the Men’s Rights Movement continues to undergo waves of activity, but they are not essentially “progressivist” waves.