By Don Quijones: Don Emilio Botín, for decades the undisputed Capo of Spanish banksters, is dead. By contrast, the bank he leaves behind him, Grupo Santander, is both alive and kicking – at least to all outward appearances. It is now the largest bank by market capitalization in the Eurozone as well as one of the thirteen leading banks in the world – no mean feat given that when Botín III took the reins of the family business from his father, Santander was merely a midsized domestic bank with just a tiny smattering of overseas operations.

Now its operations quite literally span the Western hemisphere, with the mother country accounting for just 7% of the group’s profits. Brazil’s stuttering economy is its biggest source of lucre, last year bringing in roughly 23% of the Group’s total profits, with the U.S. and Mexico accounting for 10% each. In Europe, its biggest market is the UK (17% of profits), though the bank has interests throughout the continent, most notably in Germany (6%) and Poland (6%).
However, it is the New World, not the Old World, on which Santander now has its sights firmly set. Last year, Latin American markets represented 51% of the group’s total operating revenues. Despite its recent slowdown, the region remains Santander’s main strategic target for business growth. According to the Group’s own website, it has carved out leadership positions in the continent’s “most dynamic and solid economies” – economies such as Brazil, Mexico, Chile, Uruguay, Peru, Puerto Rico and that hyper-dynamic, super-stable economy called Argentina.

Naturally, with so many of its eggs in just one basket – and one that is fast losing its allure – one can’t help but wonder what might happen should things, god forbid, go south, south of the Rio Grande. Just as importantly, now that the King of Debt is dead, who’ll be on hand to steady the ship should the South Atlantic Seas get a little choppy?

Keeping the Business in the Family
For now the answer to that question is Ana Botín, Emilio’s fifty-three-year-old daughter who was named successor less than 24 hours after her father’s passing. In many ways her appointment was the obvious choice. What better way to ensure a smooth transition than to keep the business in the family? After all, Santander Bank has already been run by three generations of Botíns; why not a fourth? The fact that Ana Botín is a woman and that women are ludicrously underrepresented in Spanish C-suites was merely an added bonus.
The problem, however, is that not everyone’s on board. In fact, there are already early murmurings of mutiny on the Santander ship. The first shot across the bow was fired yesterday by the Anglo-Saxon financial elite’s favourite weapon of choice, the Pearson Group-owned Financial Times, which raised serious questions about both the transparency of the succession process as well as the wisdom of choosing yet another Botín to lead the bank through the coming storms.
Although the article praises both the preparation and talent of the Santander heiress, in particular the “valuable” experience she gained working for JP Morgan, Coca-Cola and Santander itself, it does raise serious questions about her four-year spell as the chief of Santander’s British division in the ’90s, during which “profits fell considerably.” It also criticized the selection process, remarking that the process should at the very least be “minimally transparent and competitive,” especially in light of the fact that Santander is Europe’s biggest financial entity.
The Real Owners
Botin’s appointment is viewed as controversial by a number of major shareholders who contest the family’s continued management of the bank despite the fact that it owns only 0.7% of its shares – a remarkable statistic considering Don Emilio was always portrayed in the Spanish press as a man in complete control of the institution he headed. In reality, he was little more than a front man – granted, a very gifted one with an enviable knack at courting government and skirting scandal – but a front man all the same.
The real owners of Santander are a handful of very powerful institutional investors. They include State Street Bank and Trust (with 9.3% of Santander holdings at the last count), Chase Nominees Ltd (7.05%), the Bank of New York Mellon (3.49%), EC Nominees Ltd (4.57%) and Clearstream Banking (3.49%). With the exception of Clearstream Banking, the obscure scandal-tainted clearing and settlement division of Deutsche Borse, these institutions share one defining characteristic in common: they are all headquartered in the U.S.
And at least some of them, it seems, are growing just a little weary of the Botín dynasty. The recent implosion of Portugal’s Banco Espirito Santo bank, whose founding family’s holdings are being investigated for financial irregularities, has hardly helped matters. Neither has Santander’s post-crisis performance. Even during Don Emilio’s latter years, a large number of investors began expressing displeasure at the way the bank was being managed. In 2011 almost 25% of the bank’s shareholders opposed the re-election of Botín as president – a number that would have been unimaginable five years before.
The Limits of Growth
How long Ana Botín holds onto the job her father bequeathed her, only time will tell. What is clear is that Santander has some seriously rocky months and years ahead. Despite a recent recovery, its share price has tumbled over a third since its 2009 peak. What’s more, Don Emilio’s aggressive international strategy of acquisitions has begun to splutter. Its primary market, Latin America, is slowing dramatically, including two of its largest national markets, Argentina and Brazil, the latter of which faces the very real prospect of another sovereign default.
It’s not just in Latin America where economic slowdown could take its toll on Santander’s balance sheets. As Fortune magazine reports, the bank is also rushing into China at a time when international rivals are selling out on fears of an economic downturn and a possible banking crisis:


China’s economic growth is slowing. And a number of strategists and prominent investors have warned that its economy may be over-leveraged.
Meanwhile, closer to home, sinking real estate prices, lingering bad debt and weak credit continue to plague the Spanish banking sector. It’s worth recalling that Santander, despite its apparent immunity to the problems that doomed Spain’s savings banks, was the biggest recipient of the LTRO, the no-strings-attached life-line the European Central Bank kindly offered to credit-starved European banks in 2011-2012.
That money was used primarily to stock up on high-yielding national debt, with the result that two-and-a-half years later, Santander, like most Spanish banks, is filled to the gills with deceptively high-priced but ultimately shaky Spanish sovereign debt. As such, wherever Spain goes (and for the moment, it’s going nowhere slowly), so goes Santander. Naturally, the opposite also applies: wherever too-big-to-fail, bail out, or jail Santander goes, so too goes Spain.

By Don Quijones, freelance writer, translator in Barcelona, Spain. Raging Bull-Shit is his modest attempt to challenge the wishful thinking and scrub away the lathers of soft soap peddled by political and business leaders and their loyal mainstream media. 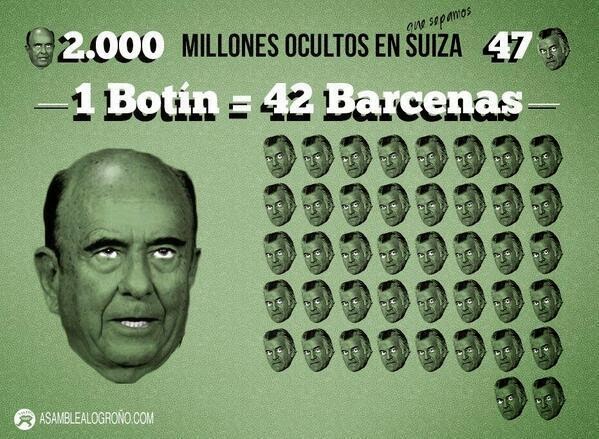 Posted by Angelo Agathangelou at 11:11 pm