fresh aggression by JSIL (aka apartheid Israel).
Orwellian UK Regulator BANNED Press TV:
“The Resistance current should boost its preparedness day by day and reinforce it's power resources inside Gaza,” Ayatollah Khamenei said in a meeting with Secretary General of the Islamic Jihad of Palestine Ramadan Abdullah in Tehran on Thursday. 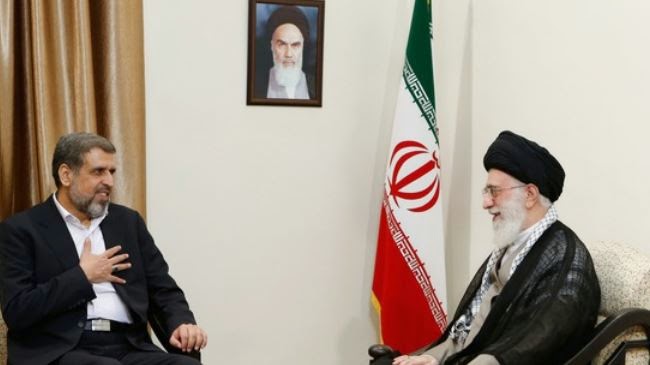 The Leader said the Palestinian resistance’s recent victory against the Israeli regime’s 50-day war indicated the realization of the “divine promise”, which will pave the way for greater triumphs.
The Leader also anticipated a promising future for the Palestinian people, saying, “The outlook of the developments is bright and good.”

Ayatollah Khamenei urged Palestinians in the West Bank to get on board in the fight against the Israeli regime, saying, “Fighting the Zionist regime (Israel) is a war of destiny.”
“The enemy should feel the same worries in the West Bank as it does in Gaza,” the Leader added.
Ayatollah Khamenei further vowed more support for the Palestinian people, stating, “The Islamic Republic and the Iranian people are proud of your victory and resistance, and hope that the back-to-back triumphs of resistance [groups] will continue until final victory.”

Abdullah, for his part, extended to the Leader the greetings of senior officials from Islamic Jihad and other Palestinian resistance groups, and presented a report on the latest Israeli war on Gaza.
“Definitely, the victory was achieved with the assistance of the Islamic Republic,” the senior Palestinian official said, adding, “Without Iran’s strategic and efficient help, resistance and victory in Gaza would have been impossible.”
Abdullah further assessed as strategic and effective the Leader’s guidelines on the necessity of arming the West Bank for countering the Israeli regime’s aggression, saying the remarks have re-energized the Palestinian fighters and raised their spirits.
On July 23, Ayatollah Khamenei said armed resistance by Palestinians is “the only way” to confront the Zionist regime.
“We believe that the West Bank should also be armed like Gaza and those who are interested in Palestine’s destiny should act in this regard,” the Leader said at the time.

Israeli launched a deadly high tech precision genocidal onslaught on the besieged Gaza Strip on July 8. Gaza health officials say over 2,140 Palestinians, including 577 children, were killed in the Israeli onslaught. Over 11,100 others, including 3,374 children, 2,088 women and 410 elderly people, but as usual mostly men, around 6,000 men were maimed. Tens of Israelis were also killed by the Palestinian resistance retaliatory firework like home made rockets.
The Israeli aggression ended on August 26 with a faux Egyptian-brokered truce.