Yet another group of Israeli land thiefs [aka settlers] have attacked yet another little eight-year-old Palestinian boy in a neighborhood of the occupied East al-Quds (aka Jerusalem), triggering violent clashes in the area, a local monitoring group says.


According to the center, the clashes erupted after local residents intervened to save the little boy.


At least 15 Palestinian rescuers were injured, some of them severely, during the clashes.

Silwan is one of many Palestinian neighborhoods in East al-Quds that has seen an influx of Israeli settlers in recent years.
According to the Palestinian Authority, approximately 400 illegal Israeli settlers have taken over nearly 40 homes in Silwan over the past few years.

Israeli forces and settlers have in recent months stepped up attacks on Palestinians, which has led to violent confrontations between the two sides.
Israeli settlers have, in recent years, carried out various attacks, including arson, on Palestinian property in the West Bank and East al-Quds.
More than half a million Israelis live in over 120 illegal settlements built since Israel’s occupation of the Palestinian territories in the West Bank and East al-Quds in 1967. 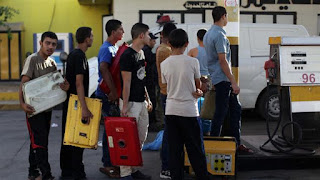 Gas stations in Gaza Strip running out of fuel: Union
The Union of Gaza gas station owners has warned about the fuel shortage in the Israeli-blockaded Palestinian territory, saying petroleum supplies in the Gaza Strip are running increasingly low.
Press TV: Mahmoud al-Shawwa, the union’s head, told Palestine’s Ma’an news agency on Friday that Gaza’s fuel shortage is blamed on a lack of gasoline coming into the coastal enclave through the Israeli-controlled Kerem Shalom crossing.
“There are gas stations in the Gaza Strip that are out of fuel, as the quantities arriving into Gaza are little and the priority is to the power station,” Shawwa said.
Although diesel fuel had entered the coastal sliver recently, it was all sent to Gaza Power Plant to keep the installation running, he added.
Gaza Power Plant has been operating at about half of its capacity of 120 megawatts (MW) over the past few years as a result of fuel shortages due to the Israeli siege.
The plant, which was also damaged during Israel’s 50-day war in the summer of 2014, has been forced to shut down on several occasions.

Since 2007, the Tel Aviv regime maintains its land, air and sea blockade on more than 1.8 million people living in Gaza, denying them the most basic items like food, medicine and fuel.
This is while the Rafah border crossing, which is Gazans’ only way of access to the outside world free from Israel’s control, has been shut by Egypt, further complicating the humanitarian situation in the enclave.
The Cairo government has also launched a heavy-handed crackdown on the underground tunnels, which are used to transfer essential supplies into the impoverished coastal sliver.