In an ideal world, Tony Blair would have been tried for war crimes years ago, and most probably would be over a decade into a life-time jail sentence for his role in the Iraq war. However, in our Orwellian world, devoid of justice and accountability, Blair is doing what he does best: warmongering. 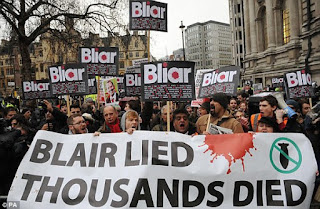 By Steven MacMillan: The former British Prime Minister stated this week that in order to defeat ISIS, Britain and the wider West will have to “wage a proper ground war against them.” Blair has been a vocal of proponent of deploying ground forces against ISIS in the Middle East and North Africa, calling again for Western troops on the ground in March of this year.
Blair’s remarks are conformation of what many in the independent media have been warning about for years now; that some individuals in the West are trying to use the threat of ISIS (which they created) to launch a full-scale invasion of Syria and attempt to oust Assad. If the West is filled with enough hubris to actually deploy ground troops to Syria, it would move the West one step closer to military confrontation with Russia.
The Illegal Invasion of the Cradle of Civilisation
There is ubiquitous evidence which proves that the 2003 invasion and occupation of Iraq was an illegal, criminal and highly destructive policy.
In 2004, the former United Nations Secretary General, Kofi Annan, denounced the invasion as “illegal,” adding that it was in violation of the UN charter. The former chief weapons inspector for the UN, Hans Blix, also condemned the Iraq war as illegal, and argued that London and Washington should have known that their ‘sources’ were poor in relation to those elusive weapons of mass destruction.
Furthermore, a Dutch inquiry in 2010 concluded that the Iraq war was illegal, and that it had no grounding in international law. There have been some reports in the UK press that senior officials in Blair’s government were told to burn a 13-page document from the former attorney general, Lord Goldsmith, who raised questions over the legality of the war, a fortnight before the war began.
A Malaysian tribunal in 2011 which applied the Nuremberg Principles to the 2003 war found that both George Bush and Tony Blair were guilty of war crimes. A leaked memo written by former US Secretary of State, Colin Powell, also appears to show that Blair was committed to military action a year prior to the invasion.
Although the death toll is widely contested and difficult to calculate, a 2013 study published in the medical journal ‘PLOS Medicine,’ concluded that approximately 500,000 people died in Iraq between 2003 and 2011, due to the war and subsequent occupation of the country.
Flashback: US Made “Willful Decision” to Support ISIS Rise
Blair’s sole justification for advocating another Western ground invasion in the Middle East (because the 2003 one went so well) is based on the threat posed from ISIS. What Blair conveniently omits from his warmongering remarks however, is the revelation from the former head of the Defense Intelligence Agency, Michael Flynn, last year. In an interview with Mehdi Hasan of Al Jazeera, Flynn reveals that the Obama administration was well aware that the Syrian opposition was predominantly composed of terrorist forces; but instead of halting the support for the Syrian opposition, the administration took the “willful decision” to support the extremists anyway.
Tony Blair belongs behind bars; not in the public arena advocating another ludicrous and nefarious war in the Middle East. A Western ground invasion would be disastrous for the region, and would only add fuel to an already volatile fire. Any rationale Western strategy would concentrate on stopping the flow of arms and money to the extremists in the region, and assist Russia and the Syrian army in their effective war against the terrorists destabilising Syria.
Steven MacMillan is an independent writer, researcher, geopolitical analyst and editor of  The Analyst Report, especially for the online magazine “New Eastern Outlook”.
Source


Posted by Angelo Agathangelou at 7:18 pm