These agreements were created 100 years ago to give juvenile defendants and first-time offenders a chance to for rehabilitate themselves. Only in the last 20 years have DPAs migrated to the field of corporate criminals, treating them like kids who’ve just gone down a bad path in life. 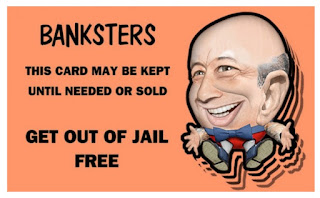 The Justice Department is leaning on these toothless agreements more and more. Of the DoJ’s 283 deferred prosecution agreements since 2000, half have come since 2010, Reilly found in a working paper for BYU Law Review.
Why has the DoJ been so keen on deferred prosecution since 2010? It coincides exactly with investigations into the 2008 financial crisis.
– From the 2014 post: The U.S. Department of Justice Handles Banker Criminals Like Juvenile Offenders…Literally
By Michael Krieger: This is a really good move by Rep. Bill Pascrell of New Jersey. Indeed, the American public certainly has a right to know the details of why the U.S. government allowed Wall Street executives to walk away free, with zero accountability and wealthier than ever before.


FBI files on the firms that contributed to the 2008 financial crisis should be released to help the public understand why no senior executives were charged, a U.S. congressman from New Jersey said.

Democrat Bill Pascrell asked FBI Director James Comey for witness interview transcripts, notes, reports and memos from the agency’s probes into the crisis, according to a letter dated Tuesday. Pascrell said the Federal Bureau of Investigation initiated criminal inquiries into at least 14 companies as part of its investigation into the origins of the crisis, which was ignited when prices of subprime-mortgage bonds plummeted after home-loan defaults soared.
“Here we are eight years later — do you think the public knows how this happened? Do you think the public knows all of the recommendations made to the Justice Department?” Pascrell said Wednesday in an interview. “Why are Hillary Clinton’s e-mails any more important?”
Pascrell, who sits on both the budget and ways and means committees, said in many cases it would be too late to bring legal actions. Releasing the information would increase transparency and provide a public service, he said. Some of the investigations would have taken place under Republican President George W. Bush and some under current Democratic President Barack Obama.

Protecting and coddling banksters is certainly a bipartisan affair.


While the Justice Department and Securities and Exchange Commission “have secured financial settlements from several major financial institutions in recent years, the investigations into potential criminal activity remain hidden from the public,” Pascrell said in his letter, which was reported earlier by the Wall Street Journal.