Run For Your Life: The Israeli Trained American Police State Is Coming To Grab You By The Pussy, Cock And Asshole!

“We’ve [USA] reached the point where state actors can penetrate rectums and vaginas, where judges can order forced catheterizations, and where police and medical personnel can perform scans, enemas and colonoscopies without the suspect’s consent. And these procedures aren’t to nab kingpins or cartels, but people who at worst are hiding an amount of drugs that can fit into a body cavity. In most of these cases, they were suspected only of possession or ingestion. Many of them were innocent...

But these tactics aren’t about getting drugs off the street... These tactics are instead about degrading and humiliating a class of people that politicians and law enforcement have deemed the enemy.” - Radley Balko, The Washington Post
***
By John W. Whitehead: Daily, all across America, individuals who dare to resist—or even question—a police order are being subjected to all sorts of government-sanctioned abuse ranging from forced catheterization, forced blood draws, roadside strip searches and cavity searches, and other foul and debasing acts that degrade their bodily integrity and leave them bloodied and bruised.

Americans as young as 4 years old are being leg shackled, handcuffed, tasered and held at gun point for not being quiet, not being orderly and just being childlike—i.e., not being compliant enough.


Government social workers actually subjected a 3-year-old boy to a forced catheterization after he was unable to provide them with a urine sample on demand (the boy still wasn’t potty trained). The boy was held down, screaming in pain, while nurses forcibly inserted a tube into his penis to drain his bladder—all of this done because the boy’s mother’s boyfriend had failed a urine analysis for drugs.


Americans as old as 95 are being beaten, shot and killed for questioning an order, hesitating in the face of a directive, and mistaking a policeman crashing through their door for a criminal breaking into their home—i.e., not being submissive enough.


Consider what happened to David Dao, the United Airlines passenger who was accosted by three police, forcibly wrenched from his seat across the armrest, bloodying his face in the process, and dragged down the aisle by the arms merely for refusing to relinquish his paid seat after the airline chose him randomly to be bumped from the flight—after being checked in and allowed to board—so that airline workers could make a connecting flight.


Those with ADHD, autism, hearing impairments, dementia or some other disability that can hinder communication in the slightest way are in even greater danger of having their actions misconstrued by police. Police shot a 73-year-old-man with dementia seven times after he allegedly failed to respond to orders to stop approaching and remove his hands from his jacket. The man was unarmed and had been holding a crucifix.


Clearly, it no longer matters where you live.


Big city or small town: it’s the same scenario being played out over and over again in which government agents, hyped up on their own authority and the power of their uniform, ride roughshod over the citizenry who—in the eyes of the government—are viewed as having no rights.


Our freedoms—especially the Fourth Amendment—continue to be torn asunder by the prevailing view among government bureaucrats that they have the right to search, seize, strip, scan, spy on, probe, pat down, taser, and arrest any individual at any time and for the slightest provocation.


Forced cavity searches, forced colonoscopies, forced blood draws, forced breath-alcohol tests, forced DNA extractions, forced eye scans, forced inclusion in biometric databases—these are just a few ways in which Americans continue to be reminded that we have no control over what happens to our bodies during an encounter with government officials.


For instance, during a “routine” traffic stop for allegedly “rolling” through a stop sign, Charnesia Corley was thrown to the ground, stripped of her clothes, and forced to spread her legs while Texas police officers subjected her to a roadside cavity probe, all because they claimed to have smelled marijuana in her car.


Angel Dobbs and her 24-year-old niece, Ashley, were pulled over by a Texas state trooper for allegedly flicking cigarette butts out of the car window. Insisting that he smelled marijuana, the trooper proceeded to interrogate them and search the car. Despite the fact that both women denied smoking or possessing any marijuana, the police officer then called in a female trooper, who carried out a roadside cavity search, sticking her fingers into the older woman’s anus and vagina, then performing the same procedure on the younger woman, wearing the same pair of gloves. No marijuana was found.


Leila Tarantino was subjected to two roadside strip searches in plain view of passing traffic during a routine traffic stop, while her two children—ages 1 and 4—waited inside her car. During the second strip search, presumably in an effort to ferret out drugs, a female officer “forcibly removed” a tampon from Tarantino. Nothing illegal was found.


Incidents like these—sanctioned by the courts and conveniently overlooked by the legislatures—teach Americans of every age and skin color the painful lesson that there are no limits to what the government can do in its so-called “pursuit” of law and order.


If this is a war, then “we the people” are the enemy.


As Radley Balko notes in The Washington Post, “When you’re at war, it’s important to dehumanize your enemy. And there’s nothing more dehumanizing than forcibly and painfully invading someone’s body — all the better if you can involve the sex organs.”


The only thing that matters to the American police state is that you comply, submit, respect authority and generally obey without question whatever a government official (anyone who wears a government uniform, be it a police officer, social worker, petty bureaucrat or zoning official) tells you to do.


This is what happens when you allow the government to call the shots: it becomes a bully.


As history shows, this recipe for disaster works every time: take police officers hyped up on their own authority and the power of the badge, throw in a few court rulings suggesting that security takes precedence over individual rights, set it against a backdrop of endless wars and militarized law enforcement, and then add to the mix a populace distracted by entertainment, out of touch with the workings of their government, and more inclined to let a few sorry souls suffer injustice than to challenge the status quo.


“It is not only under Nazi rule that police excesses are inimical to freedom,” warned former Supreme Court justice Felix Frankfurter in a 1946 ruling in Davis v. United States: “It is easy to make light of insistence on scrupulous regard for the safeguards of civil liberties when invoked on behalf of the unworthy. It is too easy. History bears testimony that by such disregard are the rights of liberty extinguished, heedlessly at first, then stealthily, and brazenly in the end.”


In other words, if it could happen in Nazi Germany, it can just as easily happen here.


It is happening here.


Unfortunately, we’ve been marching in lockstep with the police state for so long that we’ve forgotten how to march to the tune of our own revolutionary drummer. In fact, we’ve even forgotten the words to the tune.


We’ve learned the lessons of compliance too well.


For too long, “we the people” have allowed the government to ride roughshod over the Constitution, equating patriotism with blind obedience to the government’s dictates, no matter how unconstitutional or immoral those actions might be.


What can you do?


It’s simple but as I detail in my book Battlefield America: The War on the American People, the consequences may be deadly.


Stop being so obedient. Stop being so compliant and herdlike. Stop kowtowing to anyone and everyone in uniform. Stop perpetuating the false notion that those who work for the government—the president, Congress, the courts, the military, the police—are in any way superior to the rest of the citizenry. Stop playing politics with your principles. Stop making excuses for the government’s growing list of human rights abuses and crimes. Stop turning a blind eye to the government’s corruption and wrongdoing and theft and murder. Stop tolerating ineptitude and incompetence by government workers. Stop allowing the government to treat you like a second-class citizen. Stop censoring what you say and do for fear that you might be labeled an extremist or worse, unpatriotic. Stop sitting silently on the sidelines while the police state kills, plunders and maims your fellow citizens.


Stop being a slave.


As anti-war activist Rosa Luxemburg concluded, “Those who do not move, do not notice their chains.”


You may not realize it yet, but you are not free.


If you believe otherwise, it is only because you have made no real attempt to exercise your freedoms.


Had you attempted to exercise your freedoms before now by questioning a police officer’s authority, challenging an unjust tax or fine, protesting the government’s endless wars, defending your right to privacy against the intrusion of surveillance cameras, or any other effort that challenges the government’s power grabs and the generally lopsided status quo, you would have already learned the hard way that the police state has no appetite for freedom and it does not tolerate resistance.


As Glenn Greenwald notes for the Guardian:


Oppression is designed to compel obedience and submission to authority. Those who voluntarily put themselves in that state – by believing that their institutions of authority are just and good and should be followed rather than subverted – render oppression redundant, unnecessary. Of course people who think and behave this way encounter no oppression. That's their reward for good, submissive behavior. They are left alone by institutions of power because they comport with the desired behavior of complacency and obedience without further compulsion. But the fact that good, obedient citizens do not themselves perceive oppression does not mean that oppression does not exist.


Get ready to stand your ground or run for your life, because the American police state is coming to get you. 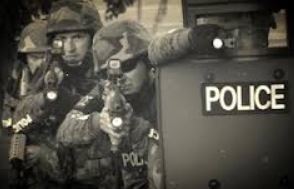 Constitutional attorney and author John W. Whitehead is founder and president of The Rutherford Institute. His new book Battlefield America: The War on the American People (SelectBooks, 2015) is available online at www.amazon.com. Whitehead can be contacted at johnw@rutherford.org.

Posted by Angelo Agathangelou at 5:58 am