'The bottom line is Macron is a total fake.' 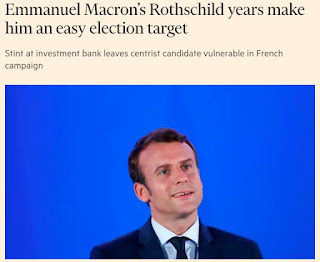 By Michael Krieger: The last thing I ever wanted to do was write about France’s likely next president, Emmanuel Macron, but here we are. This post was inspired by a very telling Financial Times article sent to me by a reader, but we’ll get to that in a bit.
Most Americans paying attention to global affairs have some conception of his opponent, nationalist firebrand Marine Le Pen, but Macron is likely to be very much a black box. I hope today’s post changes that.
Any knowledge you may have about Macron probably comes from mainstream news outlets, which have been uniformly gushing about the socialist-centrist Rothschild protege.
As an example, just take a look at the following title from a January article published at Foreign Policy.

You’d think this guy was the second coming or something. Naturally, the gushing continues beyond the title. Here are the first few paragraphs.

In some of his many previous lives, 39-year-old Emmanuel Macron has been a philosophy student, an investment banker, and a minister of economy. It is not surprising, then, in his current life as an independent candidate for the French presidency, he does not always speak like other candidates. And it’s not only the substance of his language that stands out but also, sometimes, his choice of language. Last week, in a speech at Berlin’s Humboldt University, Macron spoke in impeccable English on the imperative of giving Europe a chance.
And of giving the future a chance: Macron’s speech offered a powerful and convincing case that he is the last great French hope for a European future based on a common market and a common morality, a single currency and a singular commitment to the continent’s core values.
Though his immediate audience was Humboldt’s faculty and students, Macron was in fact addressing a far wider audience. He was seeking to mobilize French as well as German youths, and — in a reference to the program that allows EU citizens to study in other member states — the non-Erasmus as well as the Erasmus generations. Based on the audience’s response to his speech, and his surging poll numbers in France, Macron — despite not having the support of an established party, or perhaps becausehe doesn’t — is no longer the dark horse but instead the white knight for a growing number of French voters. However, what this particular knight promises, beyond verve and vitality, is not yet clear.

This author certainly isn’t holding back on the Macron infatuation. Within the first three paragraphs alone he refers to the man as “the last great French hope” and a “white knight.” Amazing.
But that’s not the most telling part of the above excerpts. I find it particularly remarkable that the author positions this manufactured candidate as some sort of outsider. Sure, he may not have the backing of an established political party, but those who do back him have far more power than that.
I came to this conclusion based on an extremely enlightening article published in the FT titled, Emmanuel Macron’s Rothschild Years Make Him an Easy Election Target. Based on the title, you’d think that the man merely had a normal, brief stint at the bank, but you’d be wrong. As you read, it becomes clear that he was groomed from day one by a Rothschild partner and ended up on a fast track like I’ve never seen before. But first, let’s examine the first two paragraphs of the article, which betrays the man’s intentions.

When Emmanuel Macron told friends in 2008 he was joining Rothschild, the prestigious investment bank, the then 30-year-old civil servant was warned it could scupper a future career in politics.
“You’re conscious that banking is not any kind of job? And Rothschild not any kind of bank?” said one friend to the man who, nine years later, would become frontrunner in France’s presidential election.

Contrary to media myths about a “white knight” who came out of nowhere to save France, this character has had his eye on high political office for at least a decade. Indeed, it appears Macron has been groomed by powerful financiers for a very long time. As the FT also notes:

The graduate of ENA, the elite school that breeds France’s future leaders, came recommended by powerful alumni of the institution, including François Henrot, a longtime Rothschild partner. But young bankers were not so impressed.
“He was the guy who would constantly say ‘thank you’,” a former colleague said. “He didn’t know what ebitda [earnings before interest, tax, depreciation and amortisation] was. He didn’t try to hide it. And instead of looking it up in a corporate finance book, he asked around, which was disarming.”

What Mr Macron lacked in technical knowledge and jargon at first, he made up for with contacts in government, says Sophie Javary, head of BNP Paribas’ corporate finance in Europe, who was asked by Mr Henrot to coach Mr Macron in the first year.
This is straight up bizarre. It appears Macron was so important to banking interests the had to form a consortium of firms to all pitch in to help him out. Yet it gets stranger still.
On the Atos deal, Mr Macron “had a fairly junior role at the time — he would be asked to redo the financial models on Excel, the basics,” recalled an adviser. But a few days after the deal was announced, Mr Macron was made a partner. A few months later, he stunned colleagues and rivals by winning a role in Nestlé’s purchase of Pfizer’s infant food operations.

As someone who spent ten years on Wall Street, I can tell you with certainty that you don’t go from updating excel models at a junior level to partner overnight. Someone extraordinarily powerful was pulling all sorts of strings for this guy. There seems to be little doubt about this.
Further hints that Macron is a total manufactured elitist creation can be seen with the following.

At the bank, Mr Macron mastered the art of networking and navigated around the numerous conflicts of interest that arise in close-knit Parisian business circles, making good use of his connections as an Inspecteur des Finances — an elite corps of the very highest-ranking graduates from ENA.
In 2010, he advised, for free, the staff of Le Monde when the newspaper was put up for sale. Journalists at the daily started doubting his loyalty when they happened upon him in conversation with Mr Minc, who was representing a bidding consortium that the staff opposed. They did not know that it was Mr Minc, a fellow Inspecteur des Finances, who had helped the young Mr Macron secure his interview at Rothschild.
A media executive who was part of the same consortium recalled: “It wasn’t clear who Emmanuel worked for. He was around, trading intelligence, friends with everyone. It was smart, because he got to know everybody in the media world.”

Indeed, who does he work for? I’m sure the French people would like to know.

Meanwhile, Macron is like a conspiracy website’s wet dream. Not only was he groomed by Rothschild bankers, he was also a Bilderberg meeting attendee in 2014. Of course.
Incredibly enough, Macron’s personal life is just as bizarre. Wikipedia notes:

Raised in a non-religious family, he was baptized a Roman Catholic at his own request at age 12.

Impressive that the man figured out religion at such a young age, but what’s even more bizarre is what he did three years later. At 15, shortly after discovering Jesus, he decided to seduce his high school teacher who was 24 years older and married with three children. I’m not in the habit of quoting Slate, but an article on this topic published there was excellent. We learn:

At 39, Emmanuel Macron would be France’s youngest-ever president. His wife, Brigitte Trogneux, just turned 64. The two met when Macron was 15 years old; Trogneux was his high-school drama teacher. After putting off the young Macron’s advances for a while, Trogneux eventually divorced her husband—the father of her three children—and moved to Paris to be with Macron, who’d left his hometown to finish high school in the capital city. They married more than a decade after meeting, in 2007.

Media accounts of their once-illicit relationship have offered it as evidence of Macron’s daring personality and willingness to break with tradition, qualities that helped make him a presidential frontrunner without a political party or any experience in elected office. “Their love affair was the kind of audacious undertaking that has defined Mr. Macron’s life and career,” the New York Timesreports. “His sheer drive, his focus and his willingness to leapfrog in a country where most success is built step by step make him more like the entrepreneurs he admires than a typical politician.” The Associated Press writes that, “from his teenage romance with a teacher to his recent ambition to become president, Emmanuel Macron often is described as unconventional and tenacious.”
This is a strange way to frame a romantic relationship between a teenager and his 40-year-old teacher. If Macron were a young woman who’d seduced her male high-school teacher away from his wife and family, her determination and ultimate success would not be proffered as signs of her leadership skills, the beginning of a life as an effective politician. She would be cast as an opportunistic Jezebel with daddy issues who slept her way into every political role she got. If Macron were an ex-teacher who’d left his wife to be with a teenage student, we’d rightly cast doubt on his maturity and morals. Depending on the details of the case, I might think he should have lost his teaching job and wonder which combination of possible gross reasons caused him to reject women his own age.
Swap Macron and Trogneux’s gender again, and the story of a goal-oriented romancer would be spun as a conventional tale of an unhinged, desperate homewrecker. Conquering resistance through patient pursuit would, to most observers, seem like obsessed-stalker behavior coming from a young girl and sexual-predator behavior coming from an older man. Macron’s disregard of Trogneux’s initial rejection—and his dogged fixation on making her his girlfriend despite her marriage and his age—don’t ring such alarm bells because we’re far more used to seeing older men with way-younger women.

What’s most notable about the above is how corporate media such as The New York Times celebrates Macron’s less than savory behavior in his pursuit of Trogneux. It may not be fake news, but it certainly looks a lot like pro-Macron propaganda.
Finally, I’d like to end with the following tweet, which I think summarizes the situation.


Macron is like the fiat money of politicians.
Created out of thin air to help bankers steal everything.
— Michael Krieger (@LibertyBlitz) 24 April 2017

The bottom line is Macron is a total fake. Indeed, he’s almost embarrassingly phony, but will it matter? My feeling is that he will probably win the May 7th runoff, but I don’t think the spread will be anywhere near as wide as everyone is predicting. I continue to think that it won’t be France, but more likely Italy, which will put the final nail in the EU coffin.
As always, we shall see.

Posted by Angelo Agathangelou at 7:38 am