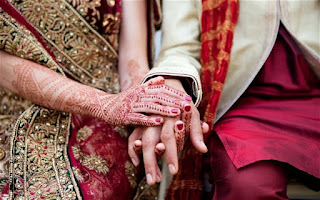 By Mike Buchanan: You wait weeks for a crazy bride story, then two arrive at once. We’ve just posted the first, about a bride who pointed a gun at her husband’s head on their wedding day, here’s the second – a piece from India, which starts:

A cold-hearted bride made sure her Hindu wedding went ahead when her groom fell ill – by marrying a guest instead.
Jugal Kishore, 25, was rushed to hospital in India after suffering an epileptic seizure [J4MB: our emphasis] on his wedding day, the Times of India reports. He returned to the venue to find his 23-year-old bride, named Indira, had already moved on to another man, says the report.
The woman was apparently angry at not being informed of her partner’s medical condition and announced she would “happily marry someone else at the wedding”.
Step forward Harper Singh, her sister’s brother-in-law, who saved the day in a casual jeans and leather jacket wedding outift (sic) to ensure the bride went home happy.

The lucky man is surely the one who didn’t marry the woman.

Posted by Angelo Agathangelou at 10:02 am