Welcome To The Offended States Of America

By Daisy Luther: If you know something is going to upset you, why would you deliberately put yourself in a situation in which you will be angered, saddened, or hurt? There’s no other answer except that you actually want to be offended. 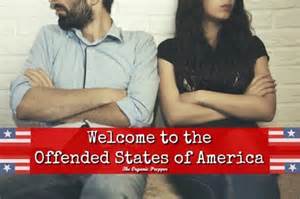 Why do we live in a world in which the offended people get to make the rules when they deliberately propel themselves into places that are certain to offend them? It’s so blatant of late that I am positive they’re doing it on purpose. We no longer live in the United States of America. We live in the Offended States of America.
Take George Washington. Wait – I didn’t mean that literally!
I’ve never seen anything so ridiculous in my life as the historic church founded by George Washington taking down the memorial of George Washington. I was gobsmacked...
“The plaques in our sanctuary make some in our presence feel unsafe or unwelcome,” the church leaders said, according to The Washington Times. “Some visitors and guests who worship with us choose not to return because they receive an unintended message from the prominent presence of the plaques.”
(source)

Even the Google listing promotes the history of the church.

And it isn’t like people have no option but to attend Christ Church. This is a map of the other Episcopal churches in the area. 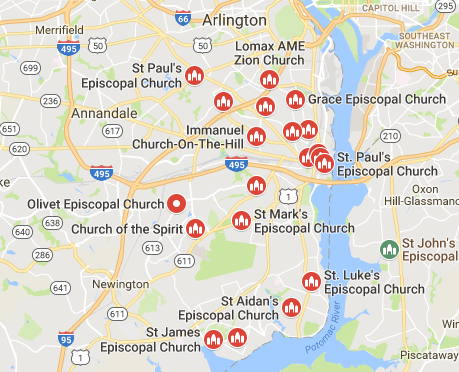 By my count, there are 21 different churches of that denomination right there in the Alexandria, Virgina area, so, honestly, I don’t think I’m being outrageous when I suggest that there are multiple options to attend an Episcopalian service in a church that George Washington did not found if one is outraged by the existence of George Washington.
This is even worse than tearing down every last vestige of Southerners who fought in the Civil War. (Here’s why I think that removing Civil War memorials is baloney.) While I don’t think any of those monuments should be removed, at least it makes a smidgeon of sense if they’re in a public place. But these people went to a church famous for its attendance by George Washington and Robert E. Lee and then got mad about it.
This underlines my belief that there are some people who want nothing more than to find something by which they can be offended. They must actually search out a setting and put themselves into it deliberately so that they can share their outrage with the world. This virtue-signaling, politically correct melodrama is a symbol of everything that is wrong with the world. People get attention from their outrage. They become famous amongst the other virtue-signallers who then jump on the Outrage Express about something that had never even crossed their minds before.
Our college campuses are rife with it as students are brainwashed by professors promoting violent sedition into resisting perceived “fascism” with the goal of changing our country into a Communist one. You’re worried about fascism, boys and girls? If you somehow succeeded in your overthrow of the Trump/Pence administration, you’d have it in spades in your ridiculously idealized Commie utopia.

And what about your privilege?

Everyone is cast in either the role of victim or victimizer. They are either the privileged or the downtrodden. In this tunnel-visioned world, men are privileged as long as they aren’t black, and then they’re probably going to prison through no fault of their own. Caucasian people need to check their white privilege, smart people need to check their cognitive privilege, and holy guacamole, according to this article, there are a metric ton of privileges we need to look out for. In case you aren’t sure if you are part of the privileged class or the victim class, here’s a handy list from the article. This way you can identify your privilege and check it.


Welcome to the Offended States of America

Literally, no one can win because if you win, someone will be offended. We have become a nation where no one is anyone if someone hasn’t offended them.
Personally, I’m offended by the constant barrage of offenses, and this isn’t the first time I’ve written about the outrageous level of outrages.

Words to express our affront are being made up left and right by the mere addition of “ism” to the ends of what were formerly perfectly neutral words. It seems like pundits can take basically any word and add “ism” to the end of it and that means they’re being slighted. The list of isms could go on and on, but instead of promoting more equality, all they’re doing is promoting more division. Isn’t that divisionism?
Personally, I’m affronted by the constant barrage of affronts. When did we, as a nation, become such weenies? How is it that such a collection of whiners has become the vocal majority? Certain people are constantly offended and demand the attention of others so they can express the epic level of their personal offendedness.
So vast is the recent level of Great American Butthurt that no mainstream news outlet is complete without breathlessly exposing a secret “ism” each day. These secret “isms” are called “microaggressions,” defined as “the everyday verbal, nonverbal, and environmental slights, snubs, or insults, whether intentional or unintentional, which communicate hostile, derogatory, or negative messages to target persons based solely upon their marginalized group membership.” (source)


Why stop with the Founding Fathers?

Now that we’re taking down all the statues of previous figures in history that offend us, let’s really get on a roll and fix this country. I think we should throw into the wormhole any movie produced by Harvey Weinstein since he was a sexual predator. And anything touched by any of those other people recently accused of being harassers? All of that needs to go, too. Don’t think Hollywood isn’t scrambling before someone demands it. Will that whole industry go down in flames because of the pervs who couldn’t stop raping and fondling women without consent?
I’m not making light of their crimes. Like most women, I’ve been on the receiving end of sexual harassment when I was in the workforce, and it’s horrible. But what I’m saying is, where does it end?
Who has not committed some act that made others feel bad? Should all of their contributions to society, entertainment, or enlightenment be ignored because they did something bad or were even wholly awful people? If something is accepted as common during a specific era, who are we to demonize them centuries later?  Where is the line drawn between people who must be erased from history and people who are foul individuals that still get to have their accomplishments present?
Find me more than a handful of our current politicians who don’t have repugnant secrets, who haven’t abused their power, who haven’t sold out to industries that are willfully poisoning us all to make a buck, or, by golly, erase every vote they have ever cast. Undo the laws that they sponsored. Tar and feather them and remove any mention of them forever. Think about it, we have the freaking William J. Clinton Library and Museum, and he was a serial harasser, womanizer, and cheater. I demand that library be renamed for someone who was perfect…or just be called The Library unless that offends illiterate people. Does this make me a readerist? Please don’t take my books away.
If our nation could be powered by offendedness, we would no longer have a need for fossil fuels. If we could earn money from outrage, we could finally correct that pesky national debt.
But until then, could we please put a lid on it before all we have left is a country completely bereft of history and culture?

Posted by Angelo Agathangelou at 6:03 am