Ali Abunimah discusses a leaked report from Creative Community for Peace (CCFP), a front for Israel government-backed lobby group StandWithUs, which admits the cultural boycott is “constantly growing” and “innovative”. 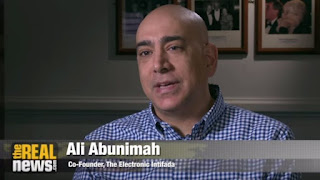 
As the campaign to boycott Israel for Palestinian rights is growing internationally, even pro-Israel lobby groups are secretly admitting on the inside that the boycott tactic is effective. A new confidential report from Creative Community for Peace, CCFP, which is a Los Angeles-based pro-Israel lobby organization that targets the entertainment and art industry, a leaked report from this group reveals that the cultural boycott against Israel has an even deeper impact than was previously recognized.

The CCFP was recently exposed by the progressive organization Jewish Voice for Peace to be a front organization for Stand With Us. Stand With Us is a staunchly right-wing pro-Israel lobby group that is, in fact, partially funded by the Israeli Ministry of Strategic Affairs, so it receives money from the Israeli government. And CCFP, its goal is to attack and organize smear campaigns against artists who participate in the cultural boycott of Israel.
So joining us to talk about what this means for the International BDS, Boycott, Divestment, and Sanctions, movement against Israel is Ali Abunimah. Ali is co-founder of the award-winning online publication The Electronic Intifada, and he’s the author of One Country and The Battle for Justice in Palestine. Thanks for joining us, Ali.
ALI ABUNIMAH: Thank you, Ben.

Posted by Angelo Agathangelou at 11:41 am