“A brazen effort by a major power to interfere with the democratic process in Ireland, something which should be of great concern to every Irish politician.”
By Ciaran Tierney: A grouping of US politicians has threatened Ireland with economic repercussions if it bans goods from Israel’s settlements in the occupied West Bank. 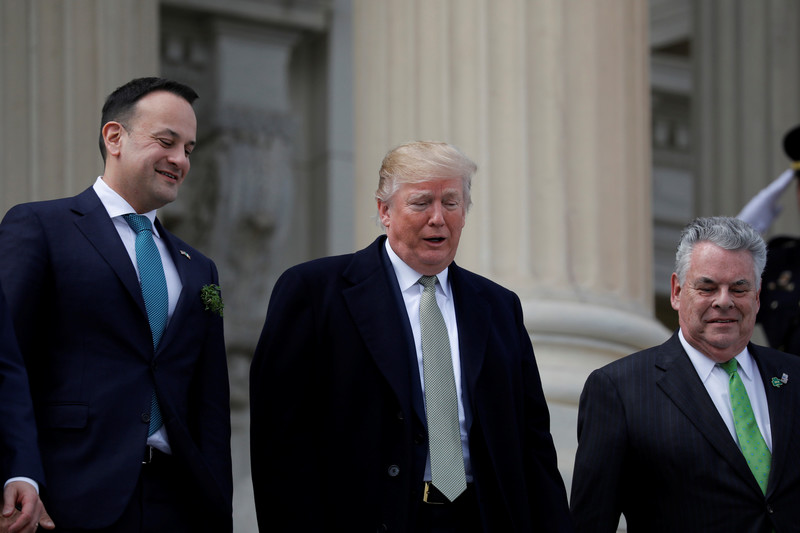 Peter King (right), seen here with Ireland’s Prime Minister Leo Varadkar and US President Donald Trump, is trying to prevent the Dublin authorities from banning Israel’s settlement goods. Aaron P. Bernstein Reuters
Both houses in the Irish parliament, the Oireachtas, have approved a bill to outlaw Israel’s settlement exports during the past few months. Ten US lawmakers have reacted to the moves by warning that a ban could have “potentially severe implications” for the country.
In a letter to Irish political leaders, the 10 members of Congress suggested that some corporations investing in Ireland would be violating US export regulations if the Dublin authorities enforced a ban on Israel’s settlement goods.
That appears to be a reference to rules introduced by the US during the 1970s in response to the Arab League boycott of Israel. Under these rules, US companies may not take part in boycott activities unless they have been approved by the federal government.
Claiming that the “stakes for Ireland are high,” the lawmakers note the importance of US investment for the country. They cite data suggesting that the US accounted for 67 percent of all foreign direct investment in Ireland during 2017.
Apple, they note, is the largest company active in Ireland, which also has attracted considerable investment from Google, Microsoft and Facebook.
Among the recipients of the letter were Leo Varadkar, Ireland’s taoiseach (prime minister) and Simon Coveney, the foreign minister. It was also sent to Micheál Martin, leader of the main opposition party Fianna Fáil.
Its 10 signatories included Peter King, a long-standing member of Congress for New York and Eliot Engel, who chairs the foreign affairs committee in the House of Representatives.

Dated 30 January, the lobbying letter – published below – has not been reported on before now.
It is the latest known attempt by US lawmakers to influence the Irish debate on Israeli settlement goods. The tone of the letter is more aggressive than one sent by Peter King to the Fianna Fáil leadership last year.
Fianna Fáil has rejected King’s pleas and instead voted to support the Occupied Territories Bill – as the legislation proposing a ban on settlement goods is known – when it went before each house of the Oireachtas.
The bill would outlaw exports from Israel’s settlements in the West Bank, all of which are illegal under international law.
“People who are sitting on the boards of these giant tech companies know and understand the rule of international law,” said Niall Collins, Fianna Fáil’s spokesperson on foreign affairs. “Peter King doesn’t speak for corporate America and his veiled threats are not backed up by a mandate to speak for Google, Twitter or any of those companies.”
Although King has taken a strong interest in Irish affairs for many decades, Collins alleged that he was “out of touch.”
“Congressman King is entitled to his views as to why these companies locate in Ireland, but he doesn’t have an informed view,” Collins added. “There’s a whole range of reasons why these companies locate in Ireland, including taxation, labor supply, the presence of an educated, English-speaking workforce and the fact that we are in the EU.”

The Occupied Territories Bill still has a few stages to go through before it can be placed on the Irish statute books.
Yet despite winning majority support in the Oireachtas, it is opposed by Fine Gael, the party heading a minority government. Simon Coveney, the foreign minister and Fine Gael’s deputy leader, has argued that Ireland does not have the power to ban Israel’s settlement goods on its own as trade policy is a matter for the EU collectively.
Coveney did not respond to a request for comment.
Gerry Liston, a lawyer with Sadaka, a Dublin-based group campaigning for Palestinian rights, described the letter from the US lawmakers as “a brazen effort by a major power to interfere with the democratic process in Ireland, something which should be of great concern to every Irish politician.”
“There is no reason why our politicians should be any less outraged by this interference in our democratic process than US politicians would be if the situation were reversed,” said Liston. He urged Varadkar and Coveney “to take a stand against this interference in our democratic process for the sake of Irish democracy, if nothing else.”

Ciaran Tierney is a journalist based in Galway, Ireland. He won the Irish current affairs and politics blog of the year award at the Tramline, Dublin in 2018. Website: ciarantierney.com.

Posted by Angelo Agathangelou at 2:57 am