These feminist students and others like them have been attacking free speech on campus for years and no one has gone after them before Bettina. 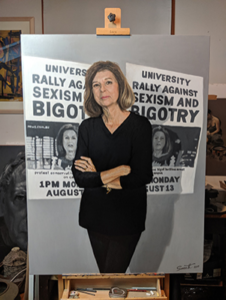 By Bettina Arndt: Great news. The University of Sydney has announced disciplinary action against four of the organisers of the violent protest against me last year. After years of tolerating thuggish behaviour from students shutting down free speech on campus, the lily-livered University has finally bit the bullet and sent a warning that such harassment is unacceptable.

Last September I made a formal complaint to the University after my protest, when the riot squad was called in to remove rowdy activists preventing me from speaking on the fake rape crisis. I named key organisers of the protest and asked for action to be taken over breaches to codes of conduct and bullying and harassment regulations.
Following over eight months of investigation by the University they have finally announced that they are taking disciplinary action against four of the five students named by me in the complaint (apparently one wasn’t a student at the time of the protest). Here’s my video about the decision –
A statement from the University claimed they had  investigated whether individual respondents had unnecessarily and unreasonably impeded the ability of members of the public and members of the University community to attend the event, whether they had impeded the event from going ahead, whether certain respondents had physically blocked certain attendees, whether respondents had coordinated their conduct with protest organisers, and whether, if established, the behaviour constituted misconduct under University policy.

And they found that found some but not all of the allegations were substantiated but not all were found to be misconduct.

The university won’t release the names of the students disciplined, nor details of their publishment – claiming they need to protect them because they received abuse when they were named by me last year.

But no doubt details of the action by the University will become public because the key troublemakers, particularly Maddy Ward, have been endlessly speaking out in the press, outraged that I would take action against them.

These students and others like them have been closing down talks on campus for years and no one has gone after them before. After years of dishing it out, they are shocked to find themselves on the receiving end.

We commend Sydney University on taking this stance. It’s good to see this university finally moving to ensure free speech – even though the Registrar’s statement most peculiarly suggested that both my talk and the protest against it were a “legitimate expression of free speech.” They would hardly be taking action against the protest organisers if that were the case.

But what’s even more important, feminists shouldn’t be allowed to shut down the presentation of the true facts about sexual assault on campus. Their campus rape scare campaign has a very dangerous goal – to bully universities into adjudicating rape on campus using lower standards of proof that will see more young men convicted.

Feminist activists already succeeding in corrupting our criminal law system by setting up alternate forms of justice which fail to offer male students normal legal protections. That’s why they are so strenuously trying to stop me exposing what they are doing at our universities.

That’s why this decision is so important.   It sends a strong message that it’s not acceptable for small groups of students to seek to shut down speakers raising controversial issues on campus.
It was Sydney University’s violent protest against me which prompted the Federal Government to call an enquiry into free speech on campus led by former High Court Chief Justice Robert French. This resulted in a national code, adopted by the government, designed to make freedom of lawful speech a “paramount value” for university staff, students and visitors. Hopefully this decision by the University of Sydney, plus impetus from the French inquiry, will serve to promote healthy debate on campuses – and put a stop to the silencing of discussion about the campus rape scare campaign. Student groups at other universities were intimidated by the violent Sydney protest from inviting me to speak – particularly after the Union of Students passed a resolution to prevent my talks.

I’m recommencing my campus tour, starting next month at UNSW and am in discussion with student groups across the country planning future events.

Finally, I thought you might like to see this wonderful portrait, by Central Coast artist Peter Smeeth, celebrating my campus tour. Smeeth is a very talented artist – he’s entering the painting in various portrait competitions. I think it is a great way to alert people to my campus rape scare campaign tour.


Posted by Angelo Agathangelou at 8:00 pm