It was another Jewish massacre of Gentiles. No one will be punished for it. 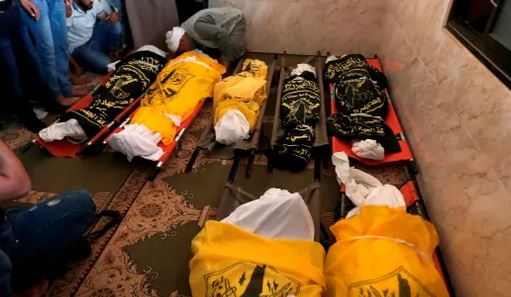 
They, who serve in the most moral army and the most advanced intelligence services in the world, didn’t know that the flimsy tin shack had long since stopped being part of the “Islamic Jihad infrastructure,” and it’s doubtful that it ever was. They didn’t know and they didn’t bother to check — after all, what’s the worst that could happen?


Reporter Yaniv Kubovich revealed the shocking truth on Friday on the Haaretz website : The target had not been re-examined for at least one year prior to the strike, the individual who was supposedly its target never existed and the intelligence was based on rumors. The bomb was dropped anyway. The result: eight bodies in colorful shrouds, some of them horrifically tiny, all in a row; members of a single extended family, the Asoarkas, five of them children — including two infants.


Palestinians gather around crater following an Israeli air strike at Deir al-Balah in the southern Gaza Strip on November 14, 2019AFP


Had they been Israeli citizens, the state would have moved heaven and earth to avenge the blood of its famous little boy, and the world would have reeled in shock at the cruelty of Palestinian terror. But Moad Mohamed Asoarka was only a 7-year-old Palestinian boy who lived and died in a tin shack, with no present and no future, whose life was as cheap and as brief as that of a butterfly; his killer was a celebrated pilot.


It was a massacre. No one will be punished for it. “The target bank had not been updated,” army officials said. (After Yaniv Kubovich’s investigation was published, the IDF Spokesman released another statement, “The building was confirmed as a target several days before the attack.”) But this massacre was worse than the targeted killing of Salah Shehada, and it was greeted by a more-sickening indifference in Israel.


On July 22, 2002, an Israel Air Force pilot dropped a one-ton bomb on a residential neighborhood that killed 16 people, including an actual wanted man. Before dawn Thursday, a pilot dropped a much smarter bomb, a JDAM, on a tin shack in which no wanted man was hiding.


It turned out that even the wanted man named by an army spokesman was a figment of his imagination. The only ones there were women, children and innocent men sleeping in the dread of the Gaza night. In both cases, the Israel Defense Forces used the same lie: We thought the building was empty. “The IDF is still trying to understand what the family was doing at the site,” was the brazen, chillingly laconic response, which suggested the family was to blame. Indeed, what were they doing there, Wasim, 13; Mohand, 12 and the two babies whose names have not been announced.


The day after the killings of Shehada and 15 of his neighbors, and after the IDF continued to claim their homes were “unoccupied shacks,” I went to the site of the bombing, the Daraj neighborhood in Gaza City. Not shacks but apartment buildings, a few stories high, all of them densely populated, like every home in Gaza. Mohammed Matar, who had worked in Israel for 30 years, lay prostrate on the floor, his arm and his eyes bandaged, amid the ruins, next to the enormous crater made by the explosion. His daughter, his daughter-in-law and four of his grandchildren died in the blast; three of his children were injured. “Why did they do this to us?” he asked me, in shock. Back then, 27 of the IAF’s most courageous pilots signed the so-called pilots letter, refusing to take part in operations in the West Bank and Gaza Strip. This time, not a single pilot has refused to participate, and it’s doubtful any will do so in the future.


“Human beings. They are human beings. There was a battle here – nurses and doctors against death,” wrote the courageous Norwegian physician Dr. Mads Gilbert, who rushes to the aid of residents of the Gaza Strip whenever it is bombed, treating the wounded with infinite dedication. Gilbert attached a photograph of the operating theater in Gaza City’s Shifa Hospital: blood on the table, blood on the floor, blood-soaked bedding everywhere. On Thursday the blood of the Asoarka family was added, crying out now to ears that will not listen.