By Angelo Agathangelou: There's a major culture shock from the mass produced plastic molded crap available for sheeple consumption at our local 'white goods' 'mega mart'. I was surprised recently that Bang and Olufsen is in the same crap category. Terrible sound quality encased in funky designs at extortionate prices going on at our local. SHAKABUKU after exposure to real quality?
With Lukasz Fikus DAC4 you get an idea of what can be achieved when the goal is sound reproduction for the music lover rather than a sting for the benefit of the 0.001%. Of course this colours ones perceptions, B&O... I always thought I wanted some of that.

I would say DAC4 is master reference for the music lover and IMHO utterly recommended for a test in any system. So what we are looking at here is an exercise in supreme reference-ness! I noticed a new page on Lukasz "Make Mozart, Not Nukes!" commercial web-site so in his words:
Level 6 = the best sound we can possibly make
but with some limitations that the best sound dictates: only SE operation, no options, only 16 bit compatible (on all frequencies). 20 and 24 bit files are truncated to 16 but still sound better than 24/192 on level 3, 4 or 5. It takes a week to build. 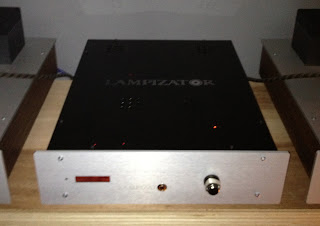 The BIG SIX - a level 6 but built in 2 x larger (wooden) box to fit even more exotic chokes and capacitors (zero electrolytes). It takes two weeks to build it."<<<

Two weeks to build by hand! I can confirm this having received photo updates. In fact the unit internals photographed on his site are of the very same BIG SIX I have on test today. This particular unit took even longer ...Built in pre-amplifier SPDIF and USB! 6.5 SUPER BIG SIX!

Mr Lampizator has hit his marques look since the release of the outstanding GM70 SE mono amps and the big six is an excellent reworking of the mold. Absent the lamps and transformers of the amps, the big six has a thick dark perspex top allowing you a cool glimpse of the nuclear monster heart beating within. Let's not forget Mr L's cool motto "Make Mozart, Not Nukes!" There's a whole heap of military hardware in the 6.5 doing just that.
Moving to the sound, I guess this review will take at least as long as the original making and I can certainly not conclude today. This is part one for first and general impressions. Also, I know my rare copper GM70 lamps are on the way from Russia and Ukraine (standard soviet tank issue;-) but not here yet nor is Mr L's "Silver Shadow" USB cable, another essential for the test and part for review.
At this point I'm using a complete Lampizator setup with my trusty big Spendor S100 speakers. Powered through the phase flip SILK, TranspOrt and GM70 SE mono amps connected to the 6.5.

In the current configuration, it's blowing my head off. It is certainly outperforming my listening room and I am sad to say even my amazing speakers. Without 15" base cones built in to the wall and a listening room at least twice the size of my meager 14 x 14 foot affair it was inevitable. Having missed my Copper tubes with the DAC4, the greater slam and 'thickness' in the sound created by the graphite version tubes inevitably amplified by the 6.5. (Like that Hulk scene with his dad, "You want my power, take it, take it all!" ..."Noooo, it's too much!")

But that's not the whole story. Lukasz confirmed my suspicion that the Copper GM70's being more midds sweet and less base heavy or "thick" would markedly alter this and I speculate that the 'silver shadow' USB will also move things in the right direction. given my experience with the digital IC silver shadow.

The DAC6.5 is simply outperforming in it's current mode. It's out-ranging my full range speakers for one. I am hearing what I want, all the detail, all the bounce but it's not right so I'll reserve final judgement until all the designed elements are properly in place.

You can plug and play a faux B&O or you can take your time and do it right. It's an audiophile thing. Stay tuned... 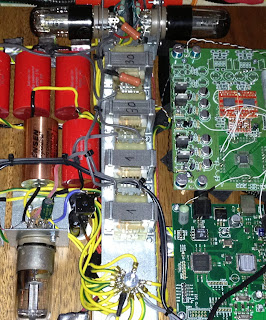 At the end of a series of changes to get the 6.5 integrated and in synergy with the rest of the system and environment, Lukasz reminded me that one subtle control of the music is obtained by dialing in between 50mA for smooth to 120mA on the meters in the GM70 amps. Tongue in cheek Lukasz chuckles, 120mA is like turning up to 11, Spinal Tap style, to really rock!

That being said I received the 6.5 fixed at 13 or 14!!! Lukasz had included a modification you can see in the picture to the right attached to the tube bottom left, in fact two of them in parallel, that brought the music forward and extended the base articulation with a power I have never experienced before. Sadly it was way too much and fatiguing. I miss it with certain Hendrix tracks and Jazz but in general for the close listening I enjoy in my review room, it was utterly intolerable.

Copper GM70 tubes finally arrived from Ukraine, I forgot how striking they are in operation emitting their brilliant copper glow. They immediately enhanced the sound, taking away the 'thickness' even before the internal modification and adding a sweetness in comparison to the graphite GM70 tubes. I also played with other special quality tubes in the amps. The effects were more subtle in terms of clarity and base smoothness. Also I am now using Lampizator solid silver, 'Silver Shadow' USB2 cable.
Now we are back to type and the 6.5 is sounding more like a big sister to the DAC4. Sound is slightly larger and improvements are there across the range as far as I can see but these are subtle. I have heard enough high end equipment to know that I could die with my DAC4. I think that at this level any 'improvements' could be argued to be, just changes.

Only just got the sound right having finally made the modifications myself with Lukasz' guidance earlier today but I can report I am already back in that magic connected place well known to Lampizator DAC and amp fans. I love the BIG SIX.

This early cloud and fix (and the fact that I have a spare just in case I fanny up) has sparked my interest to make my own further modifications. In this instance, to add a simple switch so that I can reintroduce this 'loudness effect' at my own convenience for appropriate tracks, Hendrix et al. For the switch, perhaps an early Russian Mig weapons activation button with a red for danger flip would be appropriate and a sign "do not press under any circumstances" to notify any poor unsuspecting future soul that activation is tantamount to 'Spinal Tap' 11+. ;-) I wonder if I can modify to dial the effect in gradually.
Both the USB and the pre-amp have brought major usability improvements. Using the USB connection allows my Mac to play internal or external automatically and control the volume from the Mac. You can not with an optical connection. The pre-amp has made switching from Mac to Lampizator TranspOrt and controlling the volume of the whole system a doddle with remote control.

The Grapevine:
Lukasz is in the process of developing his own power cable and we will have the first UK versions for review in a couple of months. Only IC's and speakers will be missing from an end to end Lampizator system.

Update 4th August: Redefining Warning
It's a good time when you can back off the tweaks and simply enjoy the music. I must say I am very grateful for the e-mail feedback of all natures that I have received from the community in the UK and our friends in the USA and around the world.

Positives: I have only heard high praise for DACs 4,5 or 6. In combination with GM70 Special Edition Coppers a be there experience.

Negatives: Delays in production and other cottage industry issues. Be warned, we definitely have to wait for these good things. Add on a month to the suggested delivery date. ;-)

I must add that in contrast to my good experience with the SS SPDIF cable, I encountered lose plugs issues with the latest light grey version silver shadow USB cable and have sent it back. It worked well but would occasionally drop out. A weird issue. I am using a fairly generic £20 Gold plated USB with no problem. Could I do better? Suggestions are welcome.

In the final analysis I highly recommend the Big 6... with caveats. Lukasz lays down the limitations for "the best sound". As a consumer I would also consider these factors. Various reports concur with me that you may discover that your current speakers are not up to the job as your new DAC "redefines your whole system." and 'odd' delays are inevitable. ...I still can't escape the redefining charms of my generation 4 DAC4. If you have the time and the room in your life and the capability in your speakers for the ultimate loudness button, that's the BIG 6.

This is part of an ongoing review in the following series:


X Art vs the NWO

"I DON'T PAY" is spreading across Europe (English subs)

Posted by Angelo Agathangelou at 2:57 am