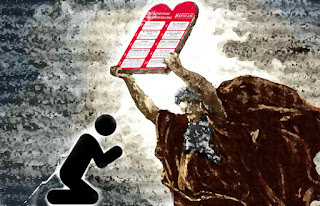 By ex-Jew Gilad Atzmon: Historically, a popular coup against an opposition party is rare.  In the last General Election Corbyn’s Labour provided us with just such an exceptional spectacle.
Labour managed to alienate its voters. Its leader turned his back on its strongest allies including, among others,  Ken Livingstone and Chris Williamson. For some reason Corbyn’s Labour turned itself into an Orwellian authoritarian apparatus; it even dug into its members’ social media accounts picking out ‘dirt’ (human right’s concerns) in order to appease one distinctive foreign lobby.
The Brits saw it all, how dangerous the party became. Many former ardent Labour supporters angrily rejected their political home. They may never return.
The conduct of the contenders for Labour’s leadership in the last few days reveals that the Brits were spot on in humiliating their opposition party.
At the moment, Labour’s leadership candidates are, without exception, competing amongst themselves to see who goes the lowest in pledging allegiance to a Jewish Lobby associated with a foreign state that is currently under investigation by the International Criminal Court (ICC)  for committing crimes against humanity.
I discussed the topic with the Great Richie Allen (from about 20/24 min/sec) :

https://www.youtube.com/watch?v=TPEdSpqJrzg&t=20m40s
Leadership contender Emily Thornberry is apparently on her “hands and knees…asking  for forgiveness.” And she is not the only one. The Zionist Times of Israel’s headlines yesterday revealed that the top candidates for Labour leadership have all vowed to lead the fight against anti-Semitism. “Keir Starmer backs automatic expulsion for offenders; Rebecca Long-Bailey: Corbyn bears personal responsibility for crisis; Jess Phillips suspends aide over anti-Semitic tweets.”
On BBC Radio, front runner Keir Starmer said, “We should have done more on anti-Semitism.”  I wonder, what did Starmer mean by that? What is the next step after thought policing and spying on party members? Re-education centres? Indoctrination facilities?  Hypnosis or maybe physiological treatment or perhaps lobotomy for those who dare to tell the truth about Israel and its Lobby?
Meanwhile, the Mail on Sunday reported that leadership contender, Jess Phillips, had on Friday suspended an aide who equated the Jewish State with the Islamic one.
Two days ago we learned that Zionist pressure on the Labour party isn’t fading away. The Board of Deputies of British Jews (BOD) published its demands of the candidates for Labour’s leadership.  The ultra Zionist Jewish Chronicle wrote “The Board of Deputies has demanded each of Labour’s candidates for leader and deputy leader sign up to its 10 ‘pledges’ in order to ‘begin healing its relationship with the Jewish community’…” 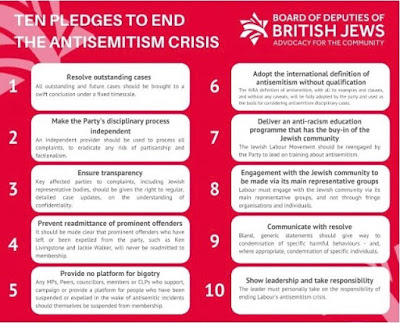 Predictably, the demands made by the BOD do not accord with Western and Christian values of pluralism and tolerance. The BOD demands that contenders ‘pledge’ to  “prevent re-admittance of prominent offenders.” One may wonder what about forgiveness and compassion, are those fundamental Western values foreign to our Labour leadership candidates?
The BOD insists that leadership contenders pledge to “provide no platform for those who have been suspended or expelled for antisemitism.” What about freedom of speech and free debate? Are those also alien to Labour’s future leaders?
The new Labour leader is expected to support the bizarre idea that the Zionist Jewish Labour Movement will grant the kosher certificate for its “anti racism education program.” I thought to myself that if the Jewish Labour Movement is so good in ‘anti racism education,’ maybe, and before anything else, it should contribute towards the cleansing of racism in Israel.
The fact that a Jewish organisation such as the BOD is so bold as to publish such ludicrous demands from a British national party is no surprise. The bizarre development here is that Labour’s  leadership candidates are engaged in an undignified battle to gain the BOD’s support.
I am not critical of the Jewish Lobby and its orbit of Zionist pressure groups. Those bodies clearly accomplished their mission.  But it is astonishing how dysfunctional the Labour party and its leadership are. The party can’t even draw the most elementary lesson from its recent electoral disaster.
Those who follow my work know that I have predicted the unfortunate downfall of Labour and the demise of the Left in general. The Left, as I have been arguing for a while, has failed to reinstate its relevance and authenticity. It is unfortunately dead in the water.

Posted by Angelo Agathangelou at 8:46 am